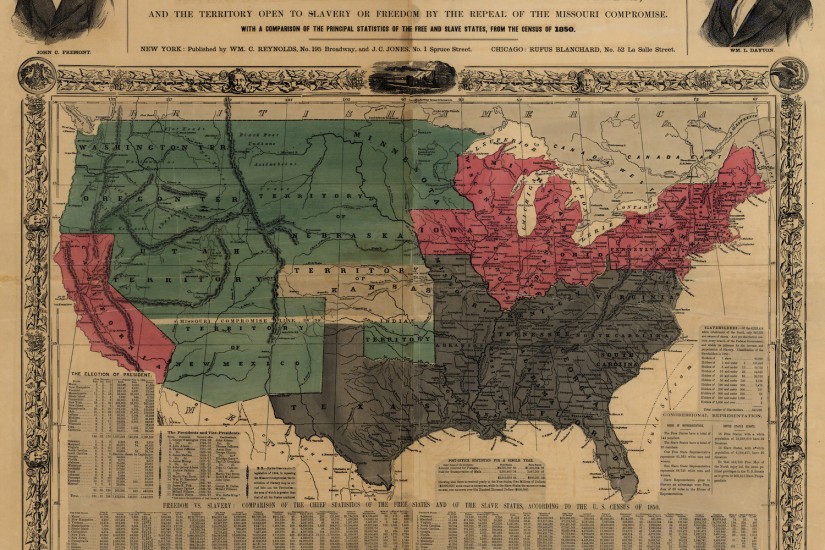 A map of the United States showing free and slave states and populations (1856).
Wikimedia Commons
…

There is a homegrown ideology of reaction in the United States, inextricably tied to our system of slavery. And while the racial content of that ideology has attenuated over time, the basic framework remains: fear of rival political majorities; of demographic “replacement”; of a government that threatens privilege and hierarchy.

The past 10 years of Republican extremism is emblematic. The Tea Party billed itself as a reaction to debt and spending, but a close look shows it was actually a reaction to an ascendant majority of black people, Latinos, Asian-Americans and liberal white people. In their survey-based study of the movement, the political scientists Christopher S. Parker and Matt A. Barreto show that Tea Party Republicans were motivated “by the fear and anxiety associated with the perception that ‘real’ Americans are losing their country.”

The scholars Theda Skocpol and Vanessa Williamson came to a similar conclusion in their contemporaneous study of the movement, based on an ethnographic study of Tea Party activists across the country. “Tea Party resistance to giving more to categories of people deemed undeserving is more than just an argument about taxes and spending,” they note in “The Tea Party and the Remaking of Republican Conservatism”; “it is a heartfelt cry about where they fear ‘their country’ may be headed.” And Tea Party adherents’ “worries about racial and ethnic minorities and overly entitled young people,” they write, “signal a larger fear about generational social change in America.”

To stop this change and its political consequences, right-wing conservatives have embarked on a project to nullify opponents and restrict the scope of democracy. Mitch McConnell’s hyper-obstructionist rule in the Senate is the most high-profile example of this strategy, but it’s far from the most egregious.

In 2012, North Carolina Republicans won legislative and executive power for the first time in more than a century. They used it to gerrymander the electoral map and impose new restrictions on voting, specifically aimed at the state’s African-American voters. One such restriction, a strict voter-identification law, was designed to target black North Carolinians with “almost surgical precision,” according to the federal judges who struck the law down. When, in 2016, Democrats overcame these obstacles to take back the governor’s mansion, the Republican-controlled Legislature tried to strip power from the office, to prevent Democrats from reversing their efforts to rig the game.

A similar thing happened in Wisconsin.