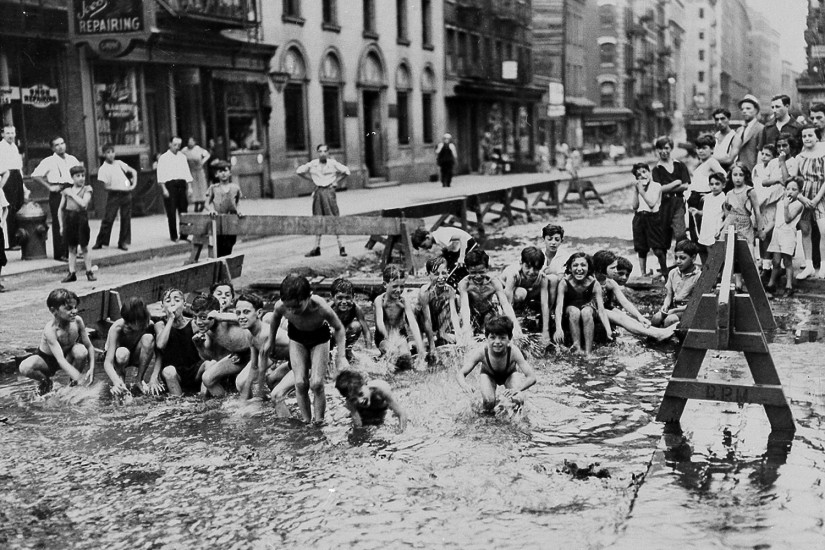 More than a century after it was published, the article reads like slapstick comedy from the silent-movie era.

It was May 1904. A street cleaner had inadvertently left a wrench beside a fire hydrant. Then a mischievous boy came along. What could go wrong?

The New York Times described the child — “a diminutive messenger boy, carrying a big suit case” — as well as the wild rumpus that ensued: “In less than a minute, the adjoining territory was a seething flood. The boy calmly turned on the water full force, threw the wrench beyond all chance of recovery, (down the sewer at the corner) and then coolly sat down on the suit case to watch the results of his mischief.” A policeman “bravely endeavored to move the faucet with his bare hands.” It was useless. “Get a cork!” the boy taunted.

The exuberant photographs you see here were shot by The Times throughout the 20th century, running with captions such as “Cooling Off City-Style” and “AH! THAT FEELS GOOD!” One caption writer was even moved to pronounce the fire hydrant as “the lifeline of summer, spewing cooling excitement to all around it.” That is certainly true. But even after the city began distributing sprinkler caps in the 1950s to reduce the amount of wasted water, fireplugs continued to be opened illegally, becoming a source of tension and sometimes violence.

Much of the rancor stemmed from the fact that New York’s poor ranked low among the city’s priorities — and knew it.