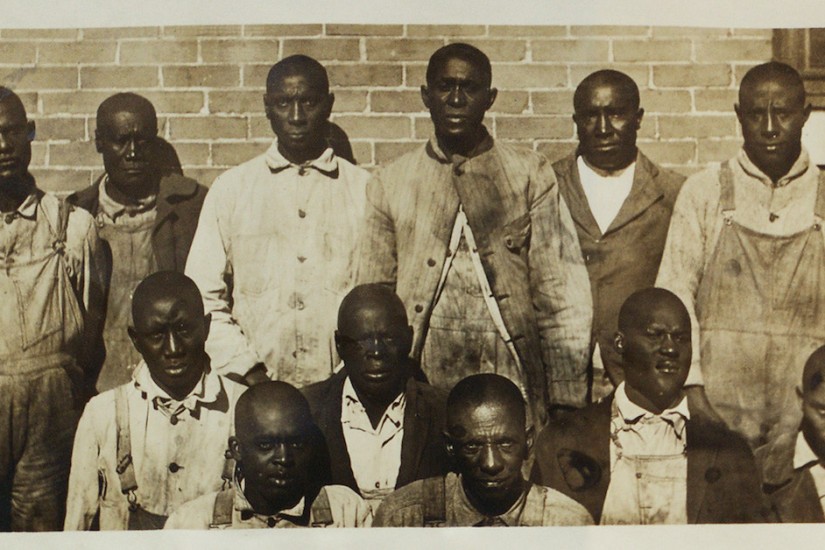 The "Elaine 12," who were convicted and sentenced to death after the 1919 Elaine Massacre. The sentences were eventually overturned.
Arkansas State Archives
…
Late in the evening of Sept. 30, black sharecropper families gathered in the Hoop Spur church near Elaine. They came to discuss membership in an organization called the Progressive Farmers and Household Union, which would help them secure a fair price for the cotton they picked and to buy land. They aimed to hire a lawyer to represent them with the landlords. The 1919 cotton crop was the most profitable in history and they stood to make a good amount of money.
At 11 p.m., a band of white men shot into the church. Black guards returned the fire, killing a white agent of the Missouri Pacific Railroad. News of the shooting quickly reached the county seat of Helena. Soon, word spread that blacks were attacking whites in Elaine. By early morning Oct. 1, the sheriff sent white veterans from the American Legion post to suppress what he deemed an insurrection.

Calls went out to the governor for federal troops. Telephone lines to Elaine were cut. Throughout the day at least 1,000 white vigilantes came from all over the state and from Mississippi to join plantation owners, their managers, sheriffs, deputies and the veterans to put down what they called an uprising. It was effectively an invasion. By day’s end, countless black women, men and children had been slaughtered.

The following morning, Gov. Charles H. Brough of Arkansas and a World War I veteran, Col. Issac Jencks, personally escorted 583 soldiers, including a machine gun battalion, from Camp Pike in Little Rock, the state capital, to Elaine. Colonel Jencks sent all of the white women and children to Helena by train, ordered the immediate disarming of everyone and authorized the killing of black insurgents who failed to disarm. Then the real massacre began: For the next five days, Colonel Jencks and his troops, assisted by vigilantes, hunted black people over a 200-mile radius. They scorched and burned homes with families inside, slaughtered and tortured others. The troops were aided by seven machine guns.

On Oct. 7, Colonel Jencks declared the insurrection over and withdrew his troops. He brought the men and women deemed insurrectionists to the Phillips County jail in Helena. On Oct. 31, a grand jury indicted 122 black men and women for offenses ranging from murder to night riding. A jury convicted 12 black men in the murders of three white men, even though two of the deaths had occurred from white people accidentally shooting each other in a frenzy. The “confessions” of the black men had been secured through torture. Black people were thus blamed, sentenced and jailed for their own massacre.