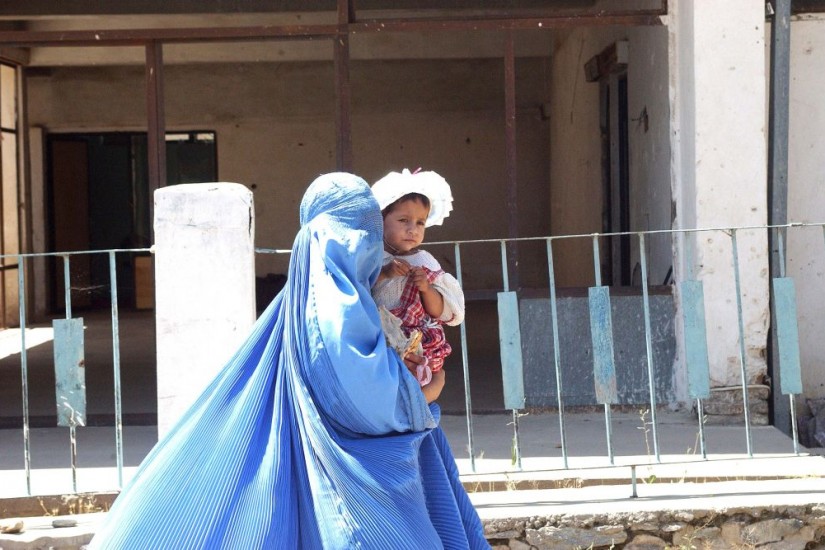 An Afghan woman holding a child in Parwan Province, Afghanistan (2005).
Sean A. Terry/Wikimedia Commons
…
Raghunath Ashna, doctor | Kandahar It would be better if Americans had never come here. Fewer people would have died. This war is not Afghanistan’s war; it is the war of the world, but they are fighting it in Afghanistan.
Agha Mohammad, farmer | Balkh These foreign forces did not bring us stability; they brought us more problems. Hundreds of Afghans are dying every week. There are many orphans and widows who lost their fathers and husbands in the war. I am angry that I have to go to burial ceremonies every day. If these foreign forces were honest, couldn’t they beat these limited number of Taliban together with Afghan government? They could. If they can’t eliminate the Taliban, they should reconcile with them.

Hamdullah Hemat, high school student | Ghazni I think it is good that Americans are in Afghanistan, and I want them to stay. If they left, the whole country will be controlled by the Taliban, and we don’t want them back.

Mohammad Reyaz, former soldier | Nangarhar I am afraid of only God. I am not afraid of these other elements. I was already on the verge of getting killed once, and I have lost my two legs. But God rescued me, so I don’t care. I will go anywhere I want to go.

Ahmad Mirwais, polio vaccine health worker | Kandahar The Americans came to our country under the banner of democracy. Now they argue that their mission failed because our society is a religious one. Despite Americans saying that they were investing billions of dollars into our country every year, the rate of poverty has increased, as has the unemployment rate. Corruption has also increased. People in the villages are not able to find food every day. So when you see all this happening in the presence of Americans, you can understand that they are not here to bring democracy or a better life for Afghanistan people.

Mohammad Kabir Ahmadi, former commando | Bamiyan American forces brought freedom to us; if they were not here, who would have freed us from the Taliban? The Americans have everything; they are like an international police force. But how were they not able to bring stability to Afghanistan yet?

Asefa Shahidi | Badakhshan The Americans’ presence hasn’t changed our life at all. We were poor before they arrived, and we are poor now. I don’t even know why they are here.

Mohammad Nasir Rahyab, professor | Herat After the invasion, I was traveling on public transportation, and people were telling one another: “Now that the United States is here, we are going to live better lives. They will buy us cars and houses.” When I got out of the car, I paid the driver 20 afghanis and told him: “The Americans are not here to buy you cars. You are wrong.” He said I was crazy. People were so happy, but I knew that Americans are not what they claimed to be. They played us. I was right. I wish I was wrong.