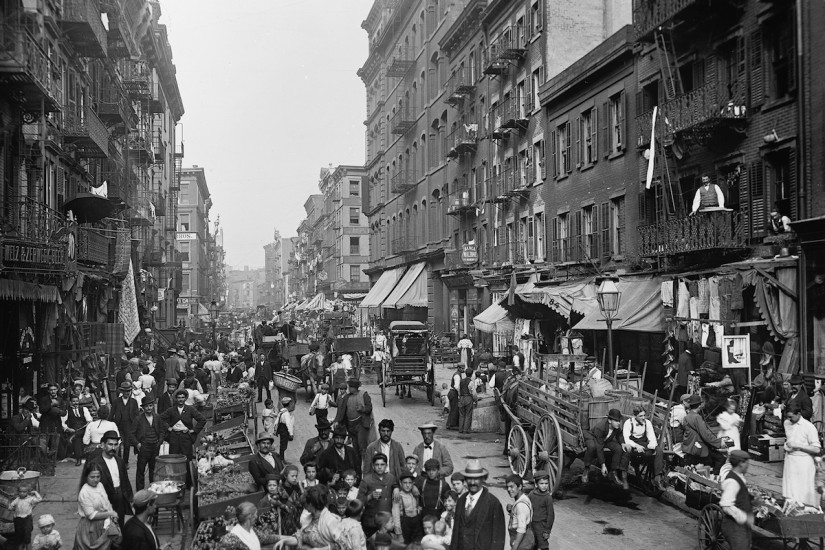 Mulberry Street in the Little Italy section of New York around 1900.
Library of Congress
…

The carnage in New Orleans was set in motion in the fall of 1890, when the city’s popular police chief, David Hennessy, was assassinated on his way home one evening. Hennessy had no shortage of enemies. The historian John V. Baiamonte Jr. writes that he had once been tried for murder in connection with the killing of a professional rival. He is also said to have been involved in a feud between two Italian businessmen. On the strength of a clearly suspect witness who claimed to hear Mr. Hennessy say that “dagoes” had shot him, the city charged 19 Italians with complicity in the chief’s murder.

That the evidence was distressingly weak was evident from the verdicts that were swiftly handed down: Of the first nine to be tried, six were acquitted; three others were granted mistrials. The leaders of the mob that then went after them advertised their plans in advance, knowing full well that the city’s elites — who coveted the businesses the Italians had built or hated the Italians for fraternizing with African-Americans — would never seek justice for the dead. After the lynching, a grand jury investigation pronounced the killings praiseworthy, turning that inquiry into what the historian Barbara Botein describes as “possibly one of the greatest whitewashes in American history.”

The blood of the New Orleans victims was scarcely dry when The Times published a cheerleading news story — “Chief Hennessy Avenged: Eleven of his Italian Assassins Lynched by a Mob” — that reveled in the bloody details. It reported that the mob had consisted “mostly of the best element” of New Orleans society. The following day, a scabrous Times editorial justified the lynching — and dehumanized the dead, with by-now-familiar racist stereotypes.

“These sneaking and cowardly Sicilians,” the editors wrote, “the descendants of bandits and assassins, who have transported to this country the lawless passions, the cutthroat practices … are to us a pest without mitigations. Our own rattlesnakes are as good citizens as they. Our own murderers are men of feeling and nobility compared to them.” The editors concluded of the lynching that it would be difficult to find “one individual who would confess that privately he deplores it very much.”

President Harrison would have ignored the New Orleans carnage had the victims been black. But the Italian government made that impossible. It broke off diplomatic relations and demanded an indemnity that the Harrison administration paid. Harrison even called on Congress in his 1891 State of the Union to protect foreign nationals — though not black Americans — from mob violence.

Harrison’s Columbus Day proclamation in 1892 opened the door for Italian-Americans to write themselves into the American origin story, in a fashion that piled myth upon myth.