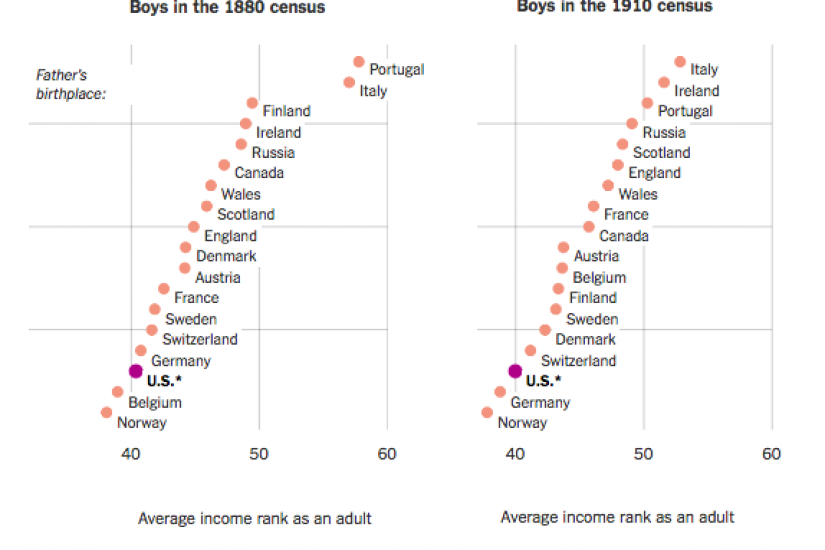 ... to the United States has consistently offered a route to escape poverty — if not for poor immigrants themselves, then for their sons.

... to the United States has consistently offered a route to escape poverty — if not for poor immigrants themselves, then for their sons.

New research linking millions of fathers and sons dating to the 1880s shows that children of poor immigrants in America have had greater success climbing the economic ladder than children of similarly poor fathers born in the United States. That pattern has been remarkably stable for more than a century, even as immigration laws have shifted and as the countries most likely to send immigrants to the United States have changed.

The findings, published in a working paper by a team of economic historians at Princeton, Stanford and the University of California, Davis, challenge several arguments central to the debate over immigration in America today. The Trump administration has moved to reorient the country’s legal immigration toward wealthier immigrants and away from poorer ones, arguing that the nation can’t afford to welcome families who will burden public programs like Medicaid. This research suggests that immigrants who arrive in poverty often escape it, if not in the first generation then the second.

“The short-term perspective on immigrant assimilation that politicians tend to take might underestimate the long-run success of immigrants,” said Ran Abramitzky, a professor at Stanford and one of the paper’s authors, along with Leah Platt Boustan, Elisa Jácome and Santiago Pérez. “By the second generation, they are doing quite well.”

President Trump and other proponents of tighter immigration have also suggested that today’s immigrants, predominantly from Latin America and Asia, are less likely to assimilate into the economy than earlier immigrant waves from Europe. This data suggests that is not true. It also shows that Norwegians, whom President Trump has held up as model immigrants, were in fact among the least successful after they arrived.

These charts show the adult outcomes of sons who grew up in families at about the 25th percentile of the income distribution in the United States. The father-son pairs are seen in a first wave in the 1880 census, at a time when most immigrants were from Northern and Western Europe, or in a second ...