... — and yet, Monteiro notes, “one could easily assume that slavery does not exist” in its universe. But if you say these things, you feel like a churl, defiantly going up against Lynne Cheney’s precepts: emphasize the positives in American history, stick with the Great Men, and so forth.

... — and yet, Monteiro notes, “one could easily assume that slavery does not exist” in its universe. But if you say these things, you feel like a churl, defiantly going up against Lynne Cheney’s precepts: emphasize the positives in American history, stick with the Great Men, and so forth.

I recently met a teacher who took his students to Hamilton. They were excited, of course. Who wouldn’t be? The Rockefeller Foundation sponsored their visit specifically because they were from low-income neighborhoods — places where they could ill afford tickets to a Broadway show, let alone the price tag for Hillary Clinton’s fund-raising performance in July. (For $100,000, donors got two premium seats and attended a wrap party with the candidate afterward.) They boned up on their Hamiltonian history, told their friends and family, got dressed up. They each paid the sum of ten dollars — a Hamilton — since their benefactors called for this rudimentary investment. When they arrived at the theater, they stood in line and received their tickets. Then the scalpers descended, offering the students hundreds of dollars apiece.

“I could see them looking at the scalpers and looking at me,” the teacher recalls. “What was I supposed to say? I just said that if you’re going to sell your ticket, then you’re not going to be able to discuss the show.” None of the students sold their tickets. Touched by their idealism and disturbed by this curbside reminder of the relationship between speculation and economic inequality, the teacher led the group into the theater. “The play’s about how anybody can make it,” he says. “But it’s not true.”

The show, he stresses, was great: an amazing spectacle. On this point, Hogeland is in complete agreement. His objections, after all, have more to do with historical emphasis.

“I think the musical is theatrically brilliant,” he says. “But it’s just the icing on the cake of this industry that’s existed for decades now, trying to promote Hamilton as something other than what he actually was.” The duel with Burr, his relationship with his wife and his mistress — these are rich material for a narrative biography, Hogeland concedes, but in terms of Hamilton’s impact on the formation and the very nature of the United States, they are little more than footnotes. “Accidents,” he calls them. They lead us to overlook what Hamilton thought was his own purpose in life. “The liberals and people on the left who are lauding Hamilton because he was an active-government guy — they just aren’t getting what was important about him. It was the intertwining of military force and wealth concentration as almost the definition of nationhood. I think if you asked him, he would say, ‘Yeah, that’s it, that’s the key, that’s what I know how to do, and no one else knew how to do it.’ That’s his genuine legacy. We just have to sort out how we feel about it.”

Art is transformative. It can make people feel great — about themselves, about another person, about a character in a Broadway musical or some aspect of the thing we refer to as America. Hamilton, as we have seen, has made history come alive, to use the overused phrase. But wait — who said history was dead? Sure, people try to kill it all the time, intentionally or unintentionally, by obscuring it or by rendering it unconscious, bludgeoning it with dates and names and (sometimes the bluntest instrument of all) facts. By now, however, the parade of Great Men reminds me of nothing so much as the boldface names in an old gossip column, a dying form, by the way, that tends to service players who already know their names but like to hear them again. History is alive only when it is in dialogue with the present. I would argue — and I am certainly not alone — that history is less like something you learn than something you do, that you take your part in, a terrifying notion if you are inclined toward the status quo.

The American Revolution, the armed military conflict with England, is long over. But in our contemporary environment of extreme economic inequality, the unsung Stamp Act protesters or Tea Party rowdies sound less singular, less distant; they are like actors, not in a play but in a pageant whose ... 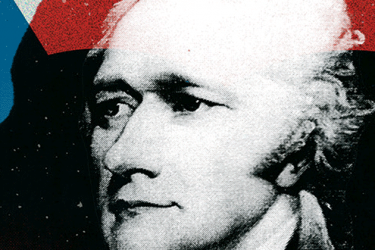 Has the celebrated musical eclipsed the man himself?
by Robert Sullivan via Harper's on October 1, 2016