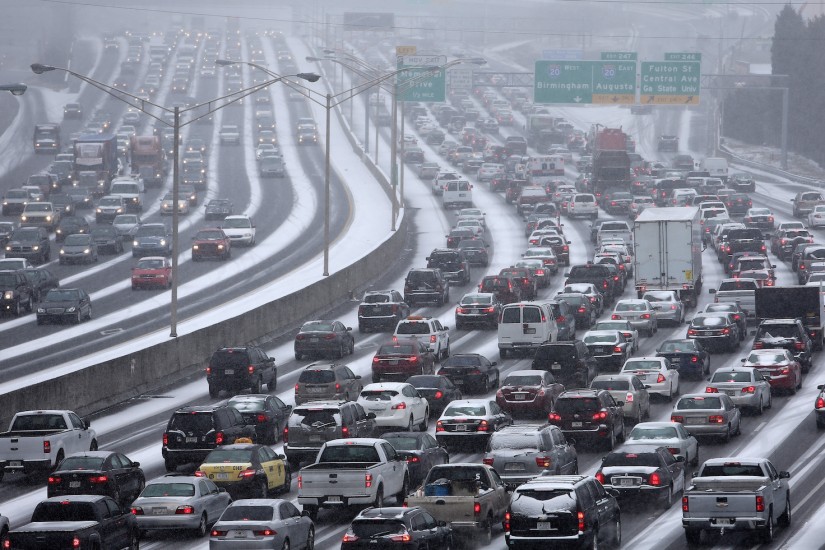 Traffic inches along the connector of Interstate's 75 and 85 in Atlanta, Jan. 28, 2014.
Ben Gray/Associated Press

Atlanta has some of the worst traffic in the United States. Drivers there average two hours each week mired in gridlock, hung up at countless spots, from the constantly clogged Georgia 400 to a complicated cluster of overpasses at Tom Moreland Interchange, better known as “Spaghetti Junction.” The Downtown Connector — a 12-to-14-lane megahighway that in theory connects the city’s north to its south — regularly has three-mile-long traffic jams that last four hours or more. Commuters might assume they’re stuck there because some city planner made a mistake, but the heavy congestion actually stems from a great success. In Atlanta, as in dozens of cities across America, daily congestion is a direct consequence of a century-long effort to segregate the races.

For much of the nation’s history, the campaign to keep African-Americans “in their place” socially and politically manifested itself in an effort to keep them quite literally in one place or another. Before the Civil War, white masters kept enslaved African-Americans close at hand to coerce their labor and guard against revolts. But with the abolition of slavery, the spatial relationship was reversed. Once they had no need to keep constant watch over African-Americans, whites wanted them out of sight. Civic planners pushed them into ghettos, and the segregation we know today became the rule.

At first the rule was overt, as Southern cities like Baltimore and Louisville enacted laws that mandated residential racial segregation. Such laws were eventually invalidated by the Supreme Court, but later measures achieved the same effect by more subtle means. During the New Deal, federal agencies like the Home Owners’ Loan Corporation and the Federal Housing Administration encouraged redlining practices that explicitly marked minority neighborhoods as risky investments and therefore discouraged bank loans, mortgages and insurance there. Other policies simply targeted black communities for isolation and demolition. The postwar programs for urban renewal, for instance, destroyed black neighborhoods and displaced their residents with such regularity that African-Americans came to believe, in James Baldwin’s memorable phrase, that “urban renewal means Negro removal.”