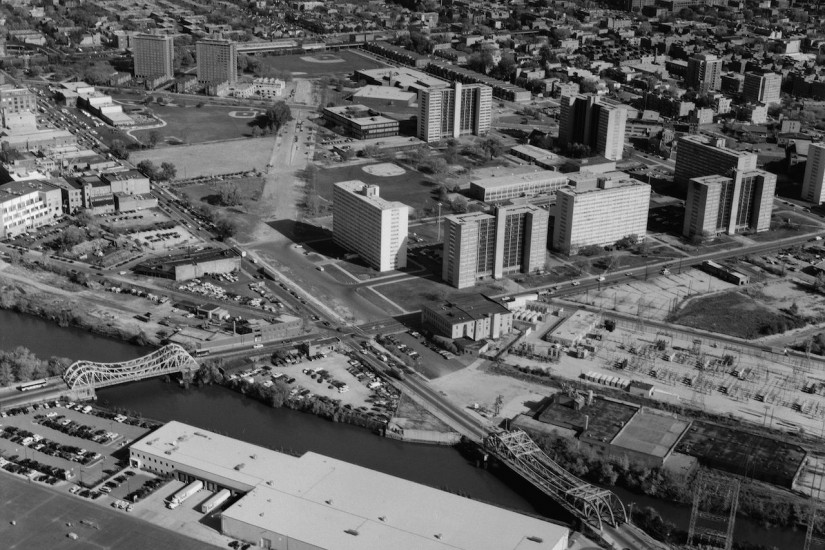 An aerial view of Chicago's Cabrini-Green housing project to the northeast, roughly 10 years before its final demolition.
Jet Lowe/Library of Congress

Public housing in America was a New Deal innovation, intended not for the poor, but rather for working-class families, those who could afford to pay modest rent if the government provided them with the homes that private builders didn’t during the Depression. The Public Works Administration then built separate projects for white and black tenants. In communities as varied as Cambridge, Cleveland and Atlanta, its developments established segregation in neighborhoods that European immigrants and African-Americans had previously shared, mostly amicably. Later, when the federal government constructed housing for workers at World War II defense plants, these new quarters also required segregation.

Liberals mobilized against the integration amendment. Paul Douglas, a leading liberal senator from Illinois, urged: “I should like to point out to my Negro friends what a large amount of housing they will get under this act. … I am ready to appeal to history and to time that it is in the best interests of the Negro race that we carry through the housing program as planned, rather than put in the bill an amendment which will inevitably defeat it.” Douglas succeeded in persuading his Northern Democratic colleagues, the amendment was defeated, and the Housing Act passed, including permission to discriminate.

In “High-Risers: Cabrini-Green and the Fate of American Public Housing,” Ben Austen, a frequent contributor to The New York Times Magazine, doesn’t specifically mention the Douglas dilemma, but he does provide the background required to resolve it — although, and this is to Austen’s credit, after reading “High-Risers” you’ll still wonder whether Douglas was correct.

I doubt that segregated housing was in anyone’s best interest, but it’s no easy call. The N.A.A.C.P. had the foresight to reject Douglas’s plea, as did the New York congressman Vito Marcantonio. Many African-Americans welcomed the subsequent construction of majority black towers like Brownsville’s Van Dyke Houses (now one of the poorest communities in New York City) or Chicago’s Cabrini-Green Homes. Located where African-American poverty was already concentrated, the Chicago high rises replaced barely habitable slum dwellings — wood-frame firetraps frequently without plumbing, heat or adequate sanitation. Yet the projects’ racial isolation came at a price, solidifying ghettos where our most serious social problems — unemployment, violence, confrontations with the police, inadequate student achievement, multigenerational poverty — fester to this day.