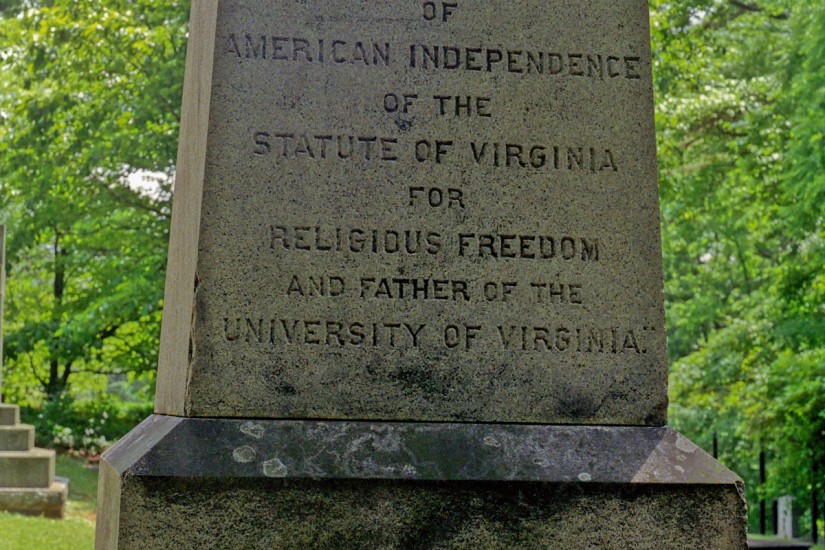 Thomas Jefferson's grave stone which describes him as the author of the Statue of Virginia for Religious Freedom.
rjcox/Flickr

In the beginning was the thing, and the thing was against God. So might begin the gospel of American secularism. The sudden flourish of secularism at the time of the United States’ foundation is incongruous, a rogue wave of rationality in a centuries-long sea of Protestant evangelising, sectarianism and God-talk. But it is undeniable. In 1788, with the adoption of its Constitution, the United States became the first modern republic founded on a legal separation of church and state. In a country that holds sacred the intentions of its revolutionary-era founders, those founders’ secular ambitions are clear. Thomas Jefferson wrote a book, The Life and Morals of Jesus of Nazareth, to try to prove that Jesus was not Christ, that the man was not the son of God. Around the world, his pithy expression ‘a wall of separation between church and state’ continues to represent a particular secular ideal of separating religious and political power.

James Madison, the primary author of the US Constitution, was an even more rigorous and consistent, if less poetic, secularist. On grounds of what he called ‘pure religious freedom’, Madison opposed military and congressional chaplains, believing that they amounted to government sponsorship of religion. Every step short of this ‘pure religious freedom’, he wrote, would ‘leave crevices at least thro’ which bigotry may introduce persecution; a monster… feeding & thriving on its own venom’.

So, in brief, what went wrong? How did the country founded by visionary secularists, and that made historic advances in both religious freedom and the separation of religious and political powers, nonetheless become the world’s most religious political democracy? Understanding secularism better helps to answer the question. Secularism is not one simple thing; it has distinct theological, philosophical and political lives. Its theological and philosophical versions are formed from simple, if explosive, ideas. In its political guise, ideas are less important than institutions, and it is on the shoals of institution-building that American secularism wrecked.