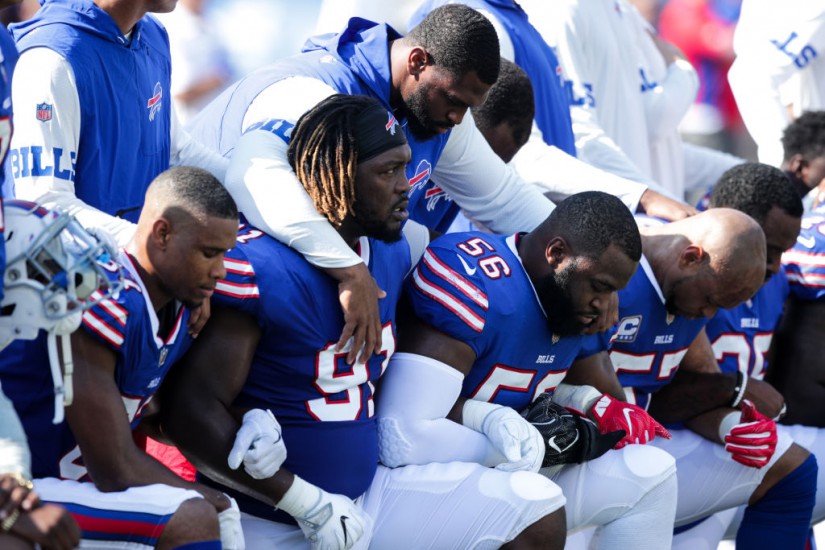 Buffalo Bills players kneel during the national anthem before a game on September 24, 2017.
Brett Carlsen/Getty Images

Listen to President Donald Trump, or any one weighing in after more than 200 NFL players took a knee during the Star Spangled Banner on Sunday, and you might think that there’s a very simple right and wrong way to listen to the national anthem, or register our objections to it. The truth is, though, that the history of playing "The Star-Spangled Banner" at American sporting events is complicated.

While there is evidence of "The Star-Spangled Banner" being played at occasional baseball games as far back as 1862, the song didn’t become a staple at sporting events until 1918—two years after President Woodrow Wilson decreed it the national anthem by executive order. (Congress followed suit and made it even more official in 1931). On September 6, 1918, during a World Series between the Boston Red Sox and Chicago Cubs—how strange does that sound?—the band in Chicago played "The Star Spangled Banner" during the seventh-inning stretch. The U.S. was in the midst of World War I, and Cubs’ third baseman Fred Thomas, on leave from the Navy at the time, saluted the flag in response to hearing the anthem. Other players followed Thomas’ lead, and the crowd sang along. The moment was so stirring that the New York Times chose to highlight it, writing, “First the song was taken up by a few, then others joined, and when the final notes came, a great volume of melody rolled across the field. It was at the very end that the onlookers exploded into thunderous applause and rent the air with a cheer that marked the highest point of the day’s enthusiasm.”

The Cubs realized they were on to something, and played the anthem during the seventh-inning stretch for the next two games in Chicago. When the series returned to Boston—where the Red Sox would win in six games, their last title for 86 years—the Red Sox tried to outdo the Cubs by playing the anthem at the beginning of the games. A tradition had been born, and over the next few decades, it became a more frequent, but not universal, practice to kick off both baseball and football games with the anthem, especially on special occasions like holidays or opening day.

One complicating factor was cost: As Marc Ferris, anthem expert and author of the book The Star-Spangled Banner said on NPR in 2016, “The thing is, you had to hire a band. That was expensive, so it was only for special occasions.” Following World War II, the invention of sound systems allowed venues to play a recording of the song at virtually no marginal cost. “And thus,” Ferris added, “they started to play it before every game.”