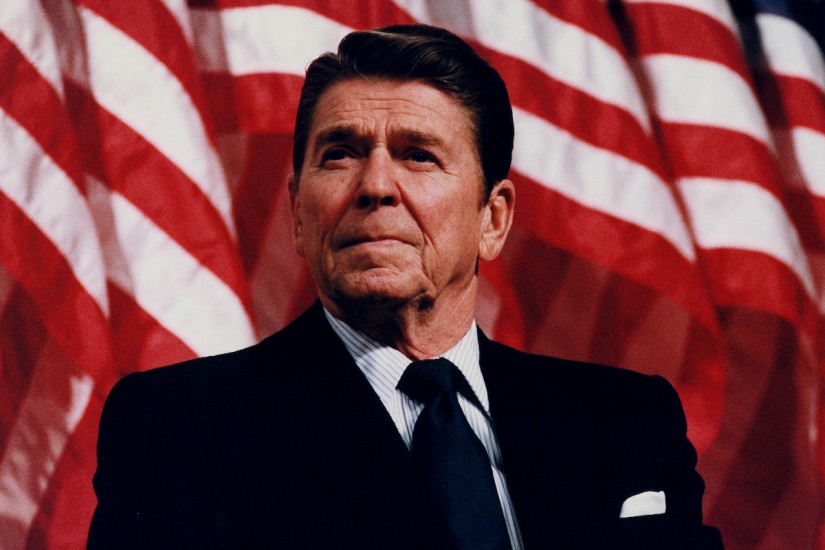 What put off Reagan’s fellow Republicans will sound very familiar. He proposed an economic program — 30 percent tax cuts, increased military spending, a balanced budget — whose math was voodoo and then some. He prided himself on not being “a part of the Washington Establishment” and mocked Capitol Hill’s “buddy system” and its collusion with “the forces that have brought us our problems—the Congress, the bureaucracy, the lobbyists, big business, and big labor.” He kept a light campaign schedule, regarded debates as optional, wouldn’t sit still to read briefing books, and often either improvised his speeches or worked off index cards that contained anecdotes and statistics gleaned from Reader’s Digest and the right-wing journal Human Events — sources hardly more elevated or reliable than the television talk shows and tabloids that feed Trump’s erroneous and incendiary pronouncements.

Like Trump but unlike most of his (and Trump’s) political rivals, Reagan was accessible to the press and public. His spontaneity in give-and-takes with reporters and voters played well but also gave him plenty of space to disgorge fantasies and factual errors so prolific and often outrageous that he single-handedly made the word gaffe a permanent fixture in America’s political vernacular. He confused Pakistan with Afghanistan. He claimed that trees contributed 93 percent of the atmosphere’s nitrous oxide and that pollution in America was “substantially under control” even as his hometown of Los Angeles was suffocating in smog. He said that the “finest oil geologists in the world” had found that there were more oil reserves in Alaska than Saudi Arabia. He said the federal government spent $3 for each dollar it distributed in welfare benefits, when the actual amount was 12 cents.

He also mythologized his own personal history in proto-Trump style. As Garry Wills has pointed out, Reagan referred to himself as one of “the soldiers who came back” when speaking plaintively of his return to civilian life after World War II — even though he had come back only from Culver City, where his wartime duty was making Air Force films at the old Hal Roach Studio. Once in office, he told the Israeli prime minister Yitzhak Shamir that he had filmed the liberated Nazi death camps, when in reality he had not seen them, let alone (as he claimed) squirreled away a reel of film as an antidote to potential Holocaust deniers. For his part, Trump has purported that his enrollment at the New York Military Academy, a prep school, amounted to Vietnam-era military service, and has borne historical witness to the urban legend of “thousands and thousands” of Muslims in Jersey City celebrating the 9/11 attacks. Even when these ruses are exposed, Trump follows the Reagan template of doubling down on mistakes rather than conceding them.

Nor was Reagan a consistent conservative. He deviated from party orthodoxy to both the left and the right. He had been by his own account a “near hopeless hemophilic liberal” for much of his adult life, having campaigned for Truman in 1948 and for Helen Gahagan Douglas in her senatorial race against Nixon in California in 1950. He didn’t switch his registration to Republican until he was 51. As California governor, he signed one of America’s strongest gun-control laws and its most liberal abortion law (both in 1967). His vocal opposition helped kill California’s 1978 Briggs Initiative, which would have banned openly gay teachers at public schools. As a 1980 presidential candidate, he flip-flopped to endorse bailouts for both New York City and the Chrysler Corporation. Reagan may be revered now as a free-trade absolutist in contrast to Trump, but in that winning campaign he called for halting the “deluge” of Japanese car imports raining down on Detroit. “If Japan keeps on doing everything that it’s doing, what they’re doing, obviously, there’s going to be what you call protectionism,” he said.