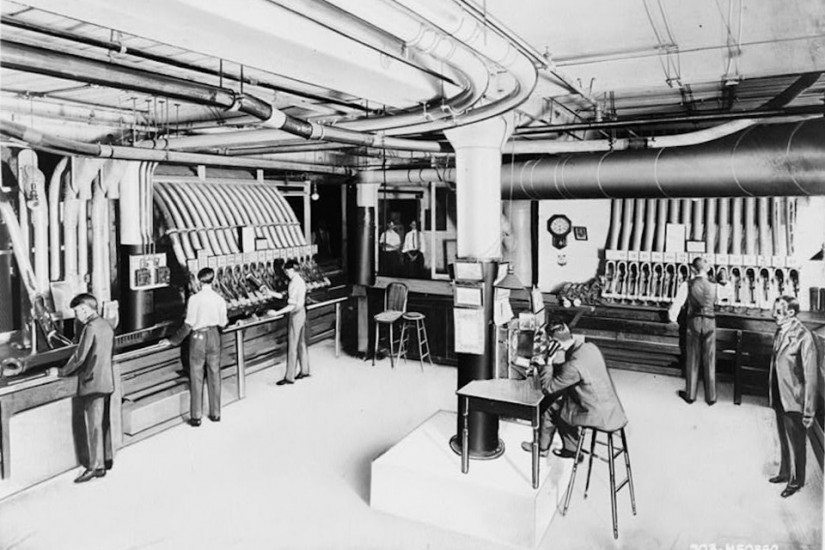 A pneumatic-tube station in the Sears, Roebuck & Company mail-order plant in Chicago, as depicted in a circa-1918 retouched photograph.
Library of Congress
…

From its founding in the late 19th century to its world-famous catalog, the history of Sears, Roebuck & Company is well known. Less storied is its magnificently successful transition from a mailing company to a brick-and-mortar giant. Like Amazon among its online-shopping rivals, Sears was not the country’s first mail-order retailer, but it became the largest of its kind. Like Amazon, it started with a single product category—watches, rather than books.

But, like Amazon, the company grew to include a range of products, including guns, gramophones, cars, and even groceries.

From the start, Sears’s genius was to market itself to consumers as an everything store, with an unrivaled range of products, often sold for minuscule profits. The company’s feel for consumer demand was so uncanny, and its operations so efficient, that it became, for many of its diehard customers, not just the best retail option, but the only one worth considering.

By building a large base of fiercely loyal consumers, Sears was able to buy more cheaply from manufacturers and wholesalers. It managed its deluge of orders with massive warehouses, like its central facility in Chicago, in which messages to various departments and assembly workers were sent through pneumatic tubes. In the decade between 1895 and 1905, Sears’s revenue grew by a factor of 50, from about $750,000 to about $38 million, according to Alfred D. Chandler Jr.’s 1977 book The Visible Hand: The Managerial Revolution in American Business. (By comparison, in the last decade, Amazon’s revenue has grown by a factor of 10.)

Then, after one of the most successful half-centuries in U.S. corporate history, Sears did something really crazy. It opened a store.