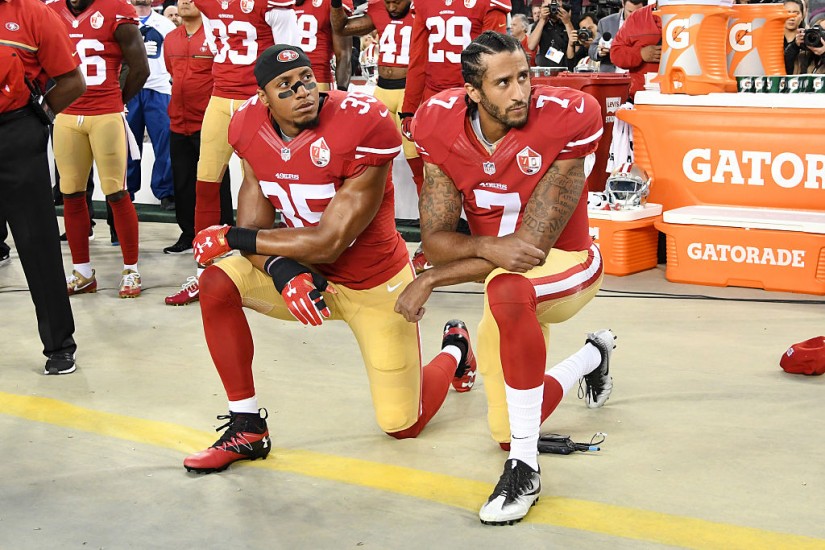 Colin Kaepernick kneels in protest during the national anthem prior to playing the Los Angeles Rams at Levi's Stadium on September 12, 2016.
Thearon W. Henderson/Getty Images

This past weekend, millions of viewers witnessed American football players, among other athletes and celebrities, “take a knee” during the playing of the US national anthem ahead of kickoff. The kneelers, among others who stayed in locker-rooms or locked arms in solidarity, were defying US President Donald Trump’s recent remarks profanely calling for athletes protesting the anthem and flag by refusing to stand to be “fired.”

With #TakeAKnee (and #TakeTheKnee, though Google Trends identifies take a knee as much a more popular search) taking off online, millions more of us witnessed the gesture, and expression, “take a knee” take on a new meaning in the broader public consciousness—and lexicon.

The protests began last fall in the National Football League (NFL) preseason when then San Francisco 49ers quarterback Colin Kaepernick sat on the bench during the anthem to protest police brutality against minorities. As he explained in a post-game interview:

"I am not going to stand up to show pride in a flag for a country that oppresses black people and people of color. To me, this is bigger than football and it would be selfish on my part to look the other way. There are bodies in the street and people getting paid leave and getting away with murder."

Though sitting itself has a long history in the Civil Rights protests, Kaepernick, joined by teammate Eric Reid, made a different gesture in his final preseason game: They took a knee, i.e., knelt down on one knee. Before the game, Kaepernick and Reid spoke with Nate Boyer, a former long snapper and Green Beret, who had previously written him a letter expressing a frustrated understanding of his protest. During their conversation, Boyer encouraged Kaepernick to “take a knee” as a compromise, in part honoring men and women who have sacrificed themselves for what the anthem and flag represent and in part peacefully protesting injustices that have failed to live up to that symbolism.