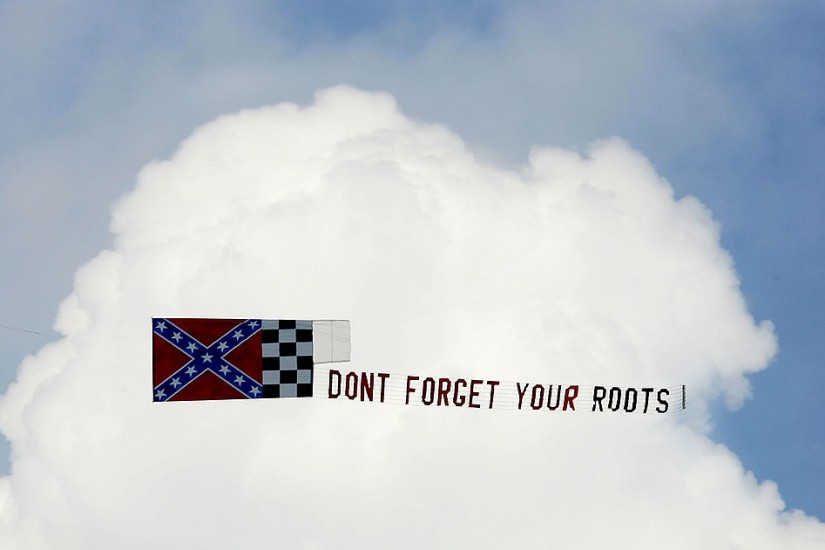 A banner follows a plane over Darlington Raceway in Darlington, South Carolina, during a protest by the Sons of Confederate Veterans (May 12, 2007).
Streeter Lecka/Getty Images

B. Frank Earnest chokes up twice during our afternoon together at Richmond’s Hollywood Cemetery. The first time, he’s describing his ritual of placing a fresh Confederate flag on the grave of his ancestor, Capt. Eusebius Fowlkes. The stone is only a marker. Fowlkes’ remains were never recovered from the field where he rode alongside Col. J.E.B. Stuart, the “Knight of the Golden Spurs,” before being killed in the Battle of Seven Pines on May 31, 1862. Earnest takes pride in the fact that his forefather fought on horseback. His people were horse breeders. In the Confederate army, unlike the elitist Northern one, joining the cavalry was just a matter of showing up with your steed.

According to family legend, Fowlkes implored his loved ones to care for his gravesite upon his demise, but they abandoned that charge when they couldn’t find a body. It took a little more than a century for Frank Earnest to realize his ancestor’s wishes. In 1978, he says, he erected a memorial to Fowlkes and adorned it with the banner of the doomed republic. For 39 years, he has phoned his cousin in Texas whenever he’s gone to pay his respects. That cousin died in July, Earnest tells me, his voice breaking. Edwin Ray, a longtime friend of Earnest’s who’s come along for the visit, turns to me and murmurs, “You see, for us, it’s all about family.”