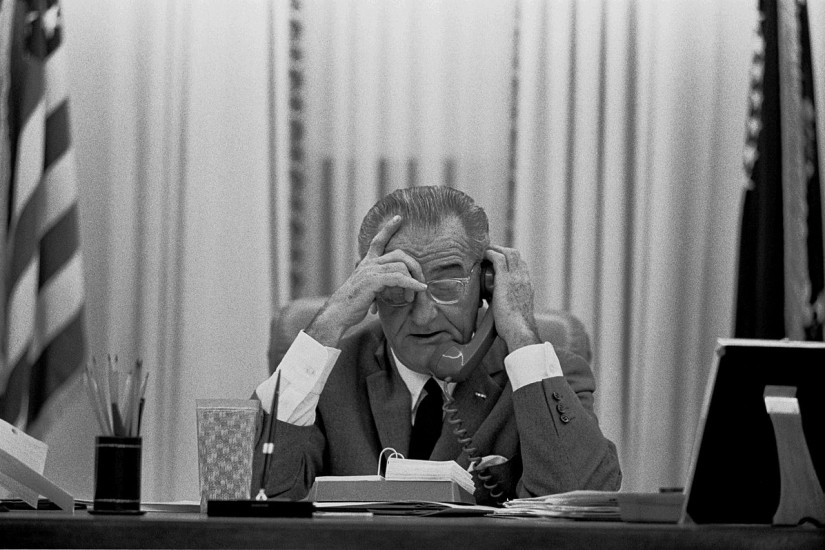 President Lyndon B. Johnson on the phone in the oval office.
Yoichi Okamoto/LBJ Library

The 18-hour Vietnam retrospective unspooling on PBS is filled with powerful words and images. Ken Burns and Lynn Novick have assembled incredible footage of key battles, filmed from both sides; they have interviewed not only the usual high-ranking policymakers, but also foot soldiers, bureaucrats, war protesters and veterans from the U.S. and from the North Vietnamese side. They’ve painted a damning portrait of Lyndon B. Johnson’s handling of a war he didn’t believe he could win. They’ve found taped phone calls showing that Richard Nixon lied through his teeth when he told LBJ in 1968 that he’d had nothing to do with persuading South Vietnam’s leader to block peace negotiations just before the presidential election. Other calls show Nixon’s national security adviser Henry Kissinger clearly acknowledging that South Vietnam will fall, with concern only that it not happen until after Nixon’s reelection. (If you are harboring doubts that Kissinger is one of the most contemptible public figures of his time, this series should put them to rest.)

Curiously, it is a piece of the past that is not in the documentary that is, for me, both a chilling forewarning of what is to come and a significant lesson for leaders who are today faced with a dilemma out of which there is no clear path. I doubt Donald Trump has any profound thoughts on the Vietnam War or any interest in its teachings, but his advisers would do well to read it.

*** It’s the transcript of the telephone call between President Johnson and Senator Richard Russell, the publicly hawkish chair of the Senate Armed Services Committee. The date is May 27, 1964—before the Gulf of Tonkin incident that led to a congressional resolution giving LBJ a free hand in Vietnam; before the bombing of the North; before the introduction of U.S. combat troops. Some 15,000 “advisers” were in Vietnam, and a succession of generals was taking and then losing political power. While General William Westmoreland and Defense Secretary Robert McNamara were issuing upbeat reports on progress, the men on the ground were telling increasingly skeptical journalists that things were looking dire. Like Trump, Johnson was a novice when it came to foreign affairs, and it showed in his questions to Russell.