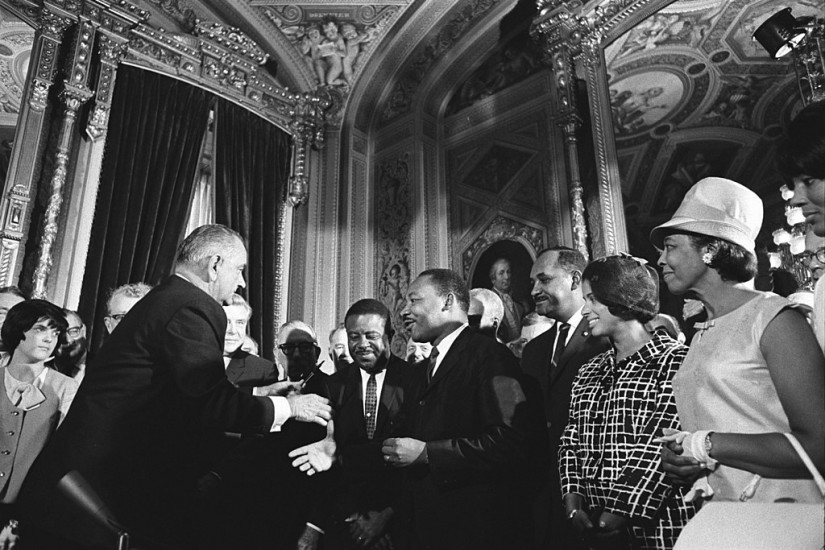 President Lyndon B. Johnson meets with Martin Luther King, Jr. at the signing of the Voting Rights Act of 1965
Wikimedia Commons/Yoichi Okamoto

In Bending Toward Justice, Professor Gary May describes a number of the conflicts between white supremacists in Alabama and nonviolent civil rights workers that led to the enactment of the Voting Rights Act of 1965—often just called the VRA. The book also describes political developments that influenced President Lyndon Johnson to support the act in 1965, and later events that supported the congressional reenactments of the VRA signed by President Richard Nixon in 1970, by President Gerald Ford in 1975, by President Ronald Reagan in 1982, and by President George W. Bush in 2006.

May’s eminently readable book is particularly timely because the Supreme Court, on June 25, 2013, issued its decision in Shelby County v. Holder, invalidating the portion of the 2006 enactment that retained the formula used in the 1965 act to determine which states and political subdivisions must obtain the approval of the Department of Justice, or the US District Court in the District of Columbia, before changes in their election laws may become effective. That formula imposed a “preclearance” requirement on states that had maintained a “test or device” as a prerequisite to voting on November 1, 1964, and had less than a 50 percent voter registration or turnout in the 1964 presidential election. Alabama, where Shelby County is located, is one of those states. Over the dissent of Alabama-born Justice Hugo Black, the Court had upheld the preclearance provision shortly after the VRA was enacted in 1966 in South Carolina v. Katzenbach.