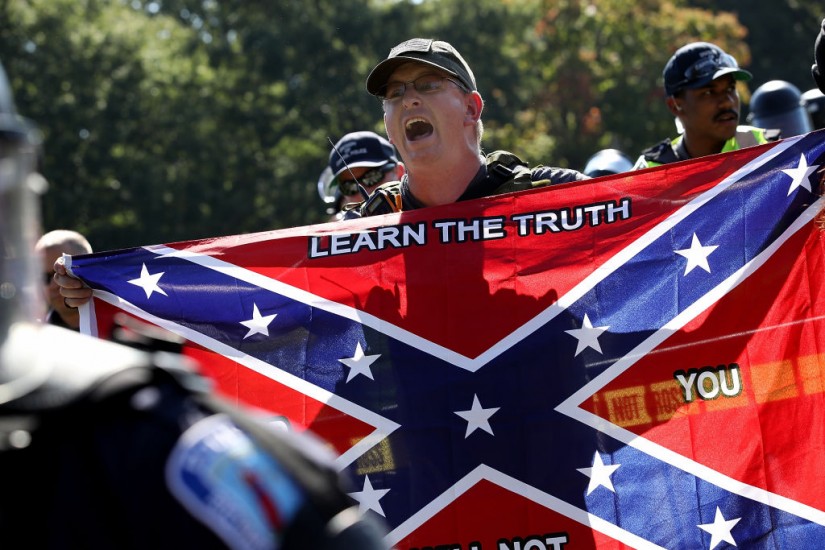 The Tennessee based group 'New Confederate State of America' held a protest in support of retaining the statue of Confederate Gen. Robert E. Lee that is located on Richmond's Monument Avenue.
Win McNamee/Getty Images

Long banished from the political lexicon and long marginalized in analyses of American life (unless modified by the term “middle”), class has been thrust back into the mainstream of public discourse. Although the country’s growing inequalities in wealth are partly responsible for this turn, the apparent attraction of the white working class to an assortment of politicians on the right—Donald Trump chief among them—is clearly a driving force. Which is to say that, for many political observers, “class” seems to be most appealing when it can be attached to what is regarded as bad or irrational behavior or, perhaps, to some notion of “false consciousness.”

The attention isn’t entirely misplaced. As early as the Democratic presidential primaries in 1964, George Wallace showed strength among ethnic working-class voters in Northern states like Wisconsin, and, running as the candidate of the American Independent Party in 1968, he won votes among unionized industrial workers as well as rural and small-town white Southerners. The defection of white working-class ethnics from the Democratic Party was one of the keys to Ronald Reagan’s victories in 1980 and 1984, and many of the defectors—“Reagan Democrats,” as they’ve come to be known—refused to return to the Democratic fold even after Reagan left office.

By the time Donald Trump entered the presidential campaign, the frustrations and hostility of white voters across the Rust Belt and outside major metropolitan areas seemed to be boiling over; many readily embraced Trump’s economic nationalism and aggressive posture toward a range of perceived enemies at home and abroad. It was these white voters, pollsters and political professionals tell us, who enabled Trump to eke out his electoral-vote victories in Wisconsin, Michigan, and Pennsylvania and, with them, the presidency.

The apparent political muscle of white working-class voters in the United States has been further validated by the rise of the radical right across Europe, and especially by the surprising victory of the Brexit vote last summer and the formidable run that Marine Le Pen of the National Front made for the French presidency this spring. In both cases, it seemed that older white voters from declining industrial districts, many of whom had once voted for the Labour Party in Britain or the Socialists and Communists in France, moved to the right, venting their discontent at the consequences of globalization and immigration—a so-called populist wave, as many media outlets described it.