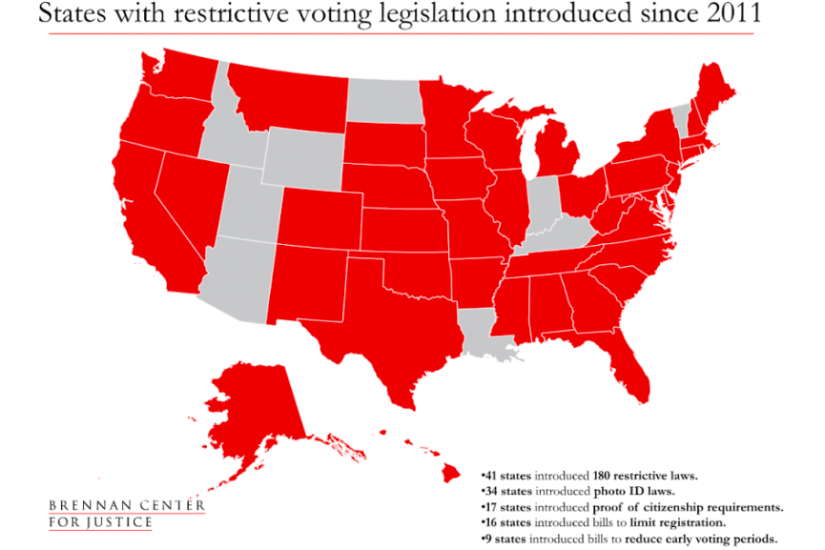 Tens of thousands of people—including President Obama—will travel to Selma this weekend to commemorate the fiftieth anniversary of “Bloody Sunday,” the infamous march that led to the passage of the Voting Rights Act.

The progress since then has been remarkable. Because of the VRA, the number of black, Hispanic and Asian officeholders has skyrocketed from under 1,000 in 1965 to over 17,000 today. “African-Americans went from holding fewer than 1,000 elected offices nationwide to over 10,000,” according to a new report from the Joint Center for Political and Economic Studies, “Latinos from a small number of offices to over 6,000, and Asian Americans from under a hundred documented cases to almost 1,000.” In Alabama, the birthplace of the VRA, the number of black elected officials has increased from eighty-six in 1970 to 757 today.

Despite these dramatic improvements, the right to vote is currently under the most sustained attack since the passage of the VRA.

In 2011 and 2012, 180 new voting restrictions were introduced in forty-one states, with new laws adopted in nineteen states that made it harder to vote, according to the Brennan Center for Justice. Many of these laws were blocked in court in 2012, but a year later the Supreme Court gutted the VRA, dealing a devastating blow to voting rights. As a result, twenty-one states had new restrictions in place in 2014.

The attack on voting rights has spread to virtually every state in the country. From 2011 to 2015, 395 new voting restrictions have been introduced in forty-nine states (Idaho is the lone exception). Half the states in the country have adopted measures making it harder to vote.

Thanks to the Supreme Court’s Shelby County v. Holder decision, states with the worst histories of voting discrimination, like Alabama, no longer have to approve their voting changes with the federal government. The Southern states that were previously subject to “precelarence” have been particularly aggressive in curbing voting rights.