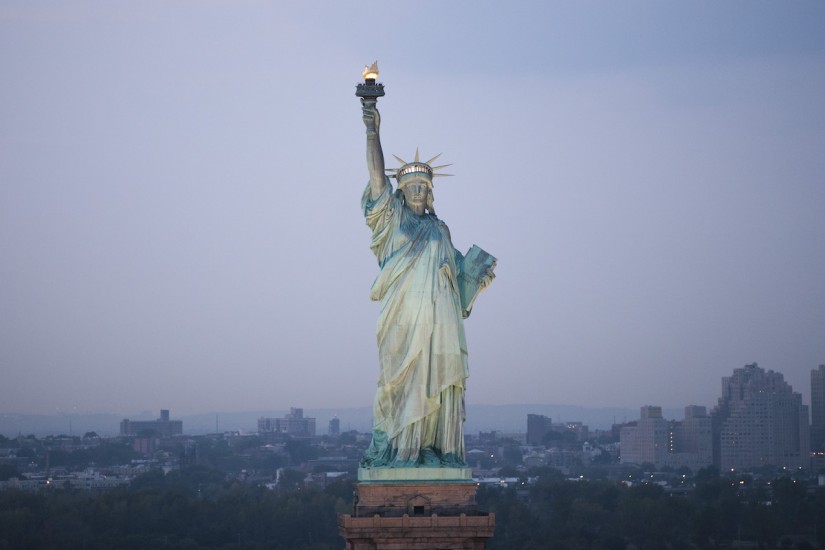 An areal view of the Statue of Liberty in 2016.
Getty Images
…

Both stories about immigration and America—that there was a glorious past in which America was pure and protected from outsiders, or that Americans have always prized multicultural inclusion—remake the past to score political points in the present. In fact, Trump’s vile exercise in nativism—the xenophobic celebration of the national self—is only the latest maneuver in a series of battles over immigrants’ role in American life and America’s place in the world. Viewed historically, the claim that these anti-immigrant policies are “not who we are,” while stirring, does not hold water. American nativist politics have deep roots.

The founders made clear enough who among immigrants they envisioned to be potential citizens, barring naturalization to all but “free white persons” who had been in the country two years. In the mid-19th century, America’s first mass nativist movement directed Protestant nationalist fury against Irish Catholic immigrants suspected of depravity and papal allegiances that would corrupt the United States’ free institutions. In the 1880s, anti-Chinese movements, fired by fears of labor competition and civilizational decline, won the first congressional legislation restricting immigrants on the basis of racialized national origin. Hatred of immigrants as poor and working people—assumed to be lazy, immoral, and given to “dependency” on American largesse—animated U.S. nativism from its birth.

But also from the beginning, anti-immigrant forces had to contend with countervailing traditions. Nineteenth-century Americans took very seriously the notion that the United States—an emerging republic in a world of powerful monarchies—had a duty to offer safety to those escaping political repression elsewhere. If the United States wanted the distinction of being an exemplary and exceptional republic, Americans must hold open their doors for the persecuted.