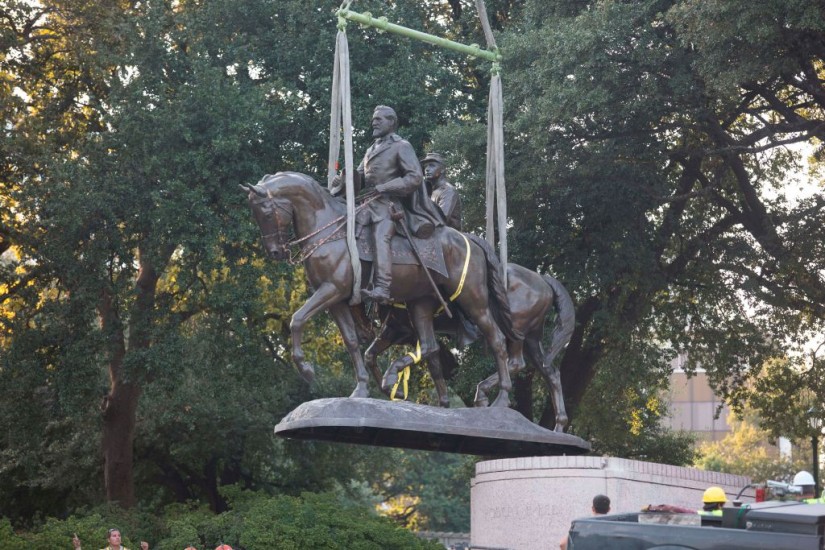 Workers work to remove a monument to Robert E. Lee in Dallas, TX. Marking a shift in historical memory of the Civil War.
Laura Buckman/Getty Images
…

The phrase “both sides” should ring familiar to us now. It is a defensive phrase, one used, perhaps, by a teacher breaking up a schoolyard fight and, in trying to spare one child from being blamed and growing upset, blames both. But history is upsetting. Feelings do get hurt. The past reveals many cruel and ugly things about ourselves and our ancestors that we may not wish to know. When an emerging consensus unsettles what we know and feel with certainty, we may revert to “both sides.” There are always victims on both sides.

Many individuals living in the southern United States today have learned about the Civil War and the Confederacy from the side of victimhood. They did not live through the war, but they have inherited memories of it from their communities, from books and movies, or from elementary school. They have memories of Confederate flags in their homes and dorm rooms. They remember seeing Confederate flags on flagpoles, outside churches, and on state buildings. They remember seeing (and still do) memorials to Confederate soldiers on streets and in public spaces. These memories as children built identities as adults. The Confederacy was not associated with slavery; it was associated with home. How dare anyone say differently?

Yet, another side of America understands Confederate iconography to be symbols of dark times in the American past. Though none of these Americans grew up during the period of slavery, and fewer and fewer actively remember segregation, the monuments remind us that these institutions were real. It is a fact that starting in 1619 people from Africa were brought to the United States to be slave laborers. It is a fact that these hundreds of thousands of people were not afforded the same rights as their owners. It is a fact that millions of human beings lived and died, often brutally, being owned by another human being. It is a fact that the enslaved did not possess an ability to live a life of their own choosing or pass a free life onto their children. It is a fact that this contradiction between the aspirational ideas of equality that founded the United States and the reality that kept certain men and women enslaved was a source of friction since our nation’s beginning. It is a fact that by 1860 the tension had grown so volatile that half of the nation seceded from the other, and a war was fought to determine whether it would reunite or be permanently separated. At best, Confederate memorials are nostalgia for a period when to see one class of citizens as inferior to another was a legitimate foundation for a new country. At worst, they are aspirations to return to those times.