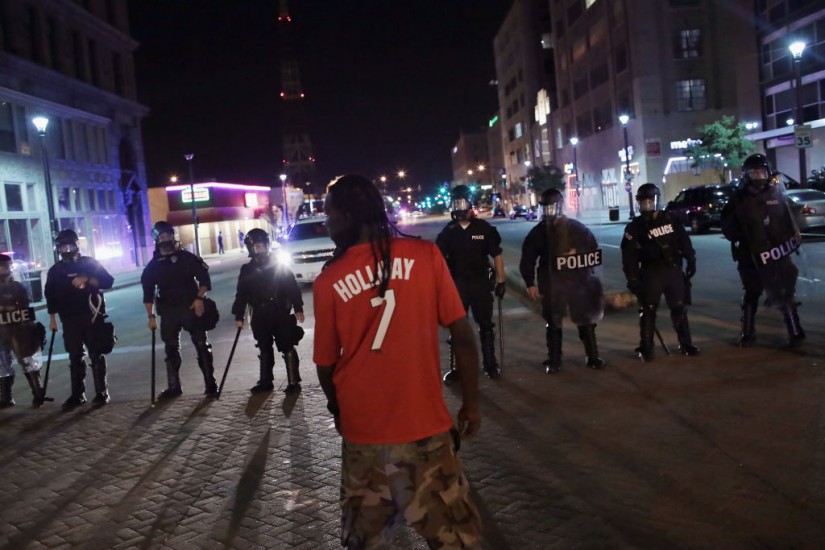 After his officers chanted “Whose streets? Our Streets!” on the night of September 18, St. Louis Police Chief Lawrence O’Toole went on television to proclaim, “The police owned tonight.” St. Louis Mayor Lyda Krewson’s reaction to the out-of-control police has been tepid at best. In response to the officers’ chant she said, “I wish they wouldn’t have said that.” Asked about O’Toole’s response, she observed what was empirically true, that it was “inflammatory,” before reiterating her “confidence” in the chief and cancelling town hall events where she was scheduled to appear.

Missouri Governor Eric Greitens, for his part, has cheered the cops on. On Twitter the governor enthused, “Saturday, some criminals broke windows & thought they'd get away. They were wrong. Officers caught ‘em, cuffed ‘em, and threw ‘em in jail.” His tweet was accompanied by a video showing four police officers carrying a protestor handcuffed, face-down, and suspended between them. Nevermind that the man in the video turned out to be a college student who intervened when he saw the police rushing at black protestors.

It goes without saying that those who seek to exercise their constitutionally protected right to assemble in the street and speak their minds will find no support from Jefferson Beauregard Sessions’s Justice Department, or from police brutality’s cheerleader-in-chief, Donald Trump.
What we have seen in St. Louis over the last fortnight is the outline of an actually existing police state. There is no apparent check on the actions of police officers but the limits of their own energy and the dictates of their own conscience.

The Dred Scott decision effectively argued that black people lived in Missouri by the grace of white people. It made clear that there would be no legal limit to what white people—either individually or constituted as the local or state government—might do to them. For black protestors, their white supporters, and anyone else unlucky enough to be standing nearby, St. Louis today represents a frightening image—part fulfillment, part portent—of the world according to Chief Justice Roger Taney.