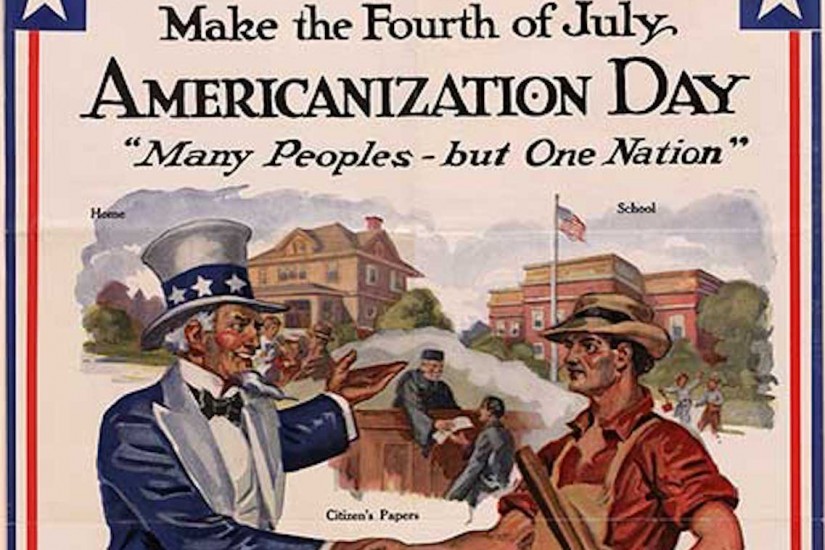 By 1910, nearly a third of the United States’ 92 million residents were either born abroad or the progeny of parents who immigrated to America. The idea of “hyphenated Americans”—citizens who identified as Polish-American or Italian-American, for example—discomforted many native-born citizens. Former President Teddy Roosevelt insisted all citizens, no matter their birthright or ethnic heritage, embrace “the simple and loyal motto, America for Americans.” Future president Woodrow Wilson, too, expressed doubts about foreign-born citizens, worrying they might harbor “alien sympathies.”
Although Americans did not know it at the time, immigrants would soon prove critical to the country’s effort in World War I, both in military service and in industry. Despite their importance, America closed its borders in the years after the armistice, ending what had been the largest immigration flow in the country’s history.

The complicated experience of immigrants on the American home front during the WWI era is conveyed in the Library’s current exhibit “Echoes of the Great War: American Experiences of World War I,” which features artifacts from divisions across the Library. In addition, case files from the Manuscript Division’s Woodrow Wilson Papers shed further light on the wartime lives of American newcomers.

Whatever nativist doubts the native-born harbored, immigrants in 1917 poured themselves into the war effort. Nearly 500,000 servicemen in the newly conscripted army consisted of individuals born abroad in 46 different nations. Like their African-American counterparts, however, immigrants were over drafted: nearly 18 percent of enlisted men were foreign born despite making up less than 15 percent of the nation’s total population.

Initially, the military subscribed to the 100-percent Americanism promoted by Roosevelt. U.S. Army Captain Ralston Flemming, for example, wrote of successful efforts at Camp Jackson in South Carolina to inculcate immigrants with “enthusiastic militant Americanism.” But the military soon adopted the gentler Americanization program of progressive reformers, which allowed for retention of cultural traditions. Congress also helped by passing legislation that enabled foreign-born soldiers to obtain expedited naturalization. Eventually, about 300,000 immigrant soldiers would attain citizenship through military service in the war.