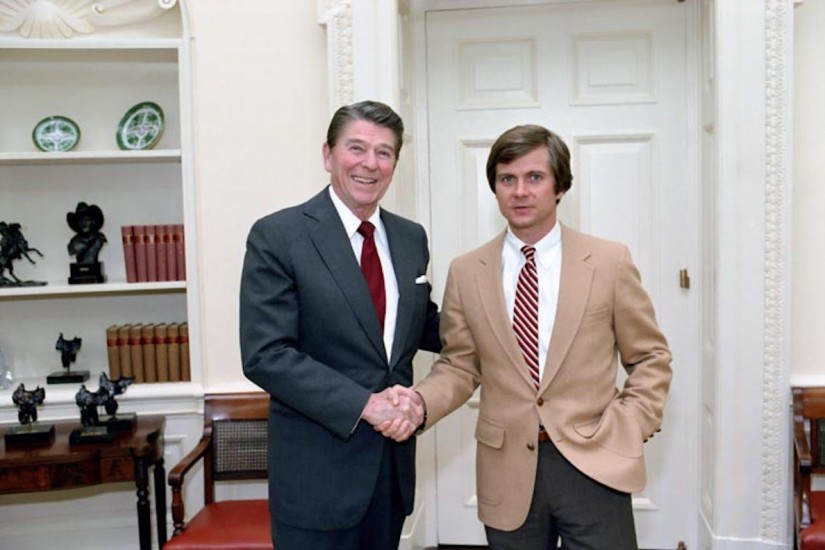 President Reagan meeting with Lee Atwater, who is famous for articulating the racist undertones to the new Southern Strategy, in the oval office. (1983)
William Fitz-Patrick/Ronald Reagan Presidential Library and Museum

It has become, for liberals and leftists enraged by the way Republicans never suffer the consequences for turning electoral politics into a cesspool, a kind of smoking gun. The late, legendarily brutal campaign consultant Lee Atwater explains how Republicans can win the vote of racists without sounding racist themselves:

You start out in 1954 by saying, “Nigger, nigger, nigger.” By 1968 you can’t say “nigger”—that hurts you, backfires. So you say stuff like, uh, forced busing, states’ rights, and all that stuff, and you’re getting so abstract. Now, you’re talking about cutting taxes, and all these things you’re talking about are totally economic things and a byproduct of them is, blacks get hurt worse than whites.… “We want to cut this,” is much more abstract than even the busing thing, uh, and a hell of a lot more abstract than “Nigger, nigger.”

Now, the same indefatigable researcher who brought us Mitt Romney’s “47 percent” remarks, James Carter IV, has dug up the entire forty-two-minute interview from which that quote derives. Here, The Nation publishes it in its entirety for the very first time.

The back-story goes like this. In 1981, Atwater, after a decade as South Carolina's most effective Republican operative, was working in Ronald Reagan's White House when he was interviewed by Alexander Lamis, a political scientist at Case Western Reserve University. Lamis published the interview without using Atwater's name in his 1984 book The Two-Party South. Fifteen years later—and eight years after Atwater passed away from cancer—Lamis republished the interview in another book using Atwater’s name. For seven years no one paid much attention. Then the New York Times' Bob Herbert, a bit of an Atwater obsessive, quoted it in an October 6, 2005 column—then five more times over the next four years.

Those words soon became legend—quoted in both screeds (The GOP-Haters Handbook, 2007) and scholarship (Corey Robin's 2011 classic work of political theory, The Reactionary Mind).