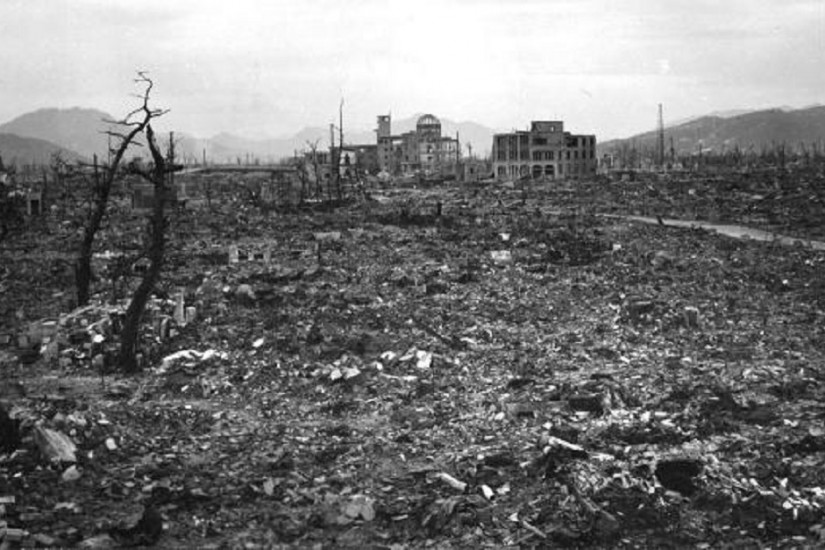 Destruction near the hypocenter of the Hiroshima atomic bombing, 1945.
National Archives

This year marks two somber anniversaries: Seventy years ago, the United States became the first and only country ever to use atomic weapons in war, incinerating the cities of Hiroshima and Nagasaki in the last days of World War II. Two decades later, the massive bombing campaign of Operation Rolling Thunder and the introduction of ground troops in Vietnam ushered in an era of napalm-fueled destruction, Agent Orange defoliation, and brutal “search-and-destroy” missions. The prolonged war cost tens of thousands of American lives and displaced, maimed, and killed millions of Vietnamese.

The use of the atomic bomb and the escalation of the war in Vietnam represent two of the most controversial episodes in the history of American warfare in the 20th century. Yet we rarely think of them as connected. We should. The terror unleashed at the dawn of the atomic era established the high stakes of the Cold War and pushed American policymakers to draft the infamous ever-escalating yet non-nuclear blueprint for war in Vietnam. The bombings in Japan and the conflict in Vietnam also share a surprising set of common players: American scientists. Twenty years after their handiwork wrought destruction in Hiroshima and Nagasaki, Manhattan Project veterans found themselves ensconced in key government and military advisory positions just as the war in Vietnam reached lethal new heights. Perhaps no other group of Americans offers as poignant a portrait of the tortured path from Hiroshima to Hanoi as these men do. Twice in their lifetimes, these elite scientists willingly contributed their expertise to devastating projects whose outcomes they couldn’t control and would come to regret.

The physicists who joined the Manhattan Project in the early days of World War II were largely patriotic men who worried that Nazi scientists were racing to build an atomic bomb. They saw their work as intellectually exciting, but also necessary and just. As it became increasingly clear that the Germans had failed in their efforts, however, a handful of Manhattan Project participants began to worry about how the bomb might actually be used. In July 1945, concerned researchers at the University of Chicago’s “Met Lab,” home of the first nuclear chain reaction, sent a petition to President Harry Truman, urging him to consider the “moral responsibilities” involved in any decision to use the atomic bomb against Japan. The physicist Leo Szilard, who in 1939 had joined Albert Einstein in calling for what would become the Manhattan Project, now begged the president to avoid a direct atomic attack and instead opt for a demonstration of the bomb’s destructive power on an uninhabited island. His entreaties fell on deaf ears.