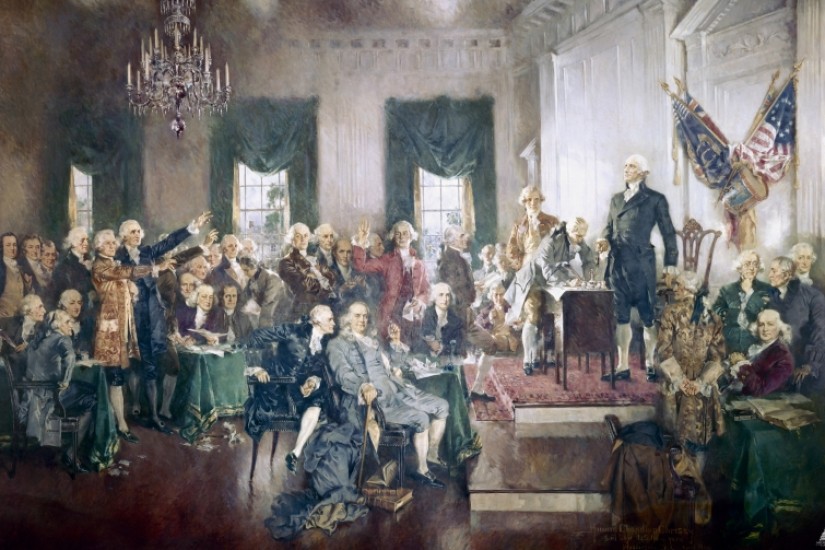 &#34;Scene at the Signing of the Constitution of the United States,&#34; a 1940 painting of the 1787 Constitutional Convention.
Howard Chandler Christy/Wikimedia Commons

The Constitutional Convention in Philadelphia was winding down, the draft of the United States’ supreme law almost finished, and George Mason, the author of Virginia’s Declaration of Rights, was becoming alarmed. Over the course of the convention, the 61-year-old had come to fear the powerful new government his colleagues were creating. Mason thought the president could become a tyrant as oppressive as George III.

So on September 8, 1787, he rose to ask his fellow delegates a question of historic importance. Why, Mason asked, were treason and bribery the only grounds in the draft Constitution for impeaching the president? Treason, he warned, wouldn’t include “attempts to subvert the Constitution.”

After a sharp back-and-forth with fellow Virginian James Madison, Mason came up with another category of impeachable offenses: “other high crimes and misdemeanors.” Americans have debated the meaning of this decidedly open-ended phrase ever since. But its inclusion, as well as the guidance the Founders left regarding its interpretation, offers more protection against a dangerous executive power than many realize.

Of all the Founders who debated impeachment, three Virginians—Mason, Madison and delegate Edmund Randolph—did the most to set down a vision of when Congress should remove a president from office. Though the men had very different positions on the Constitution, their debates in Philadelphia and at Virginia’s ratifying convention in Richmond produced crucial definitions of an impeachable offense. And their ultimate agreement—that a president should be impeached for abuses of power that subvert the Constitution, the integrity of government, or the rule of law—remains essential to the debates we’re having today, 230 years later.