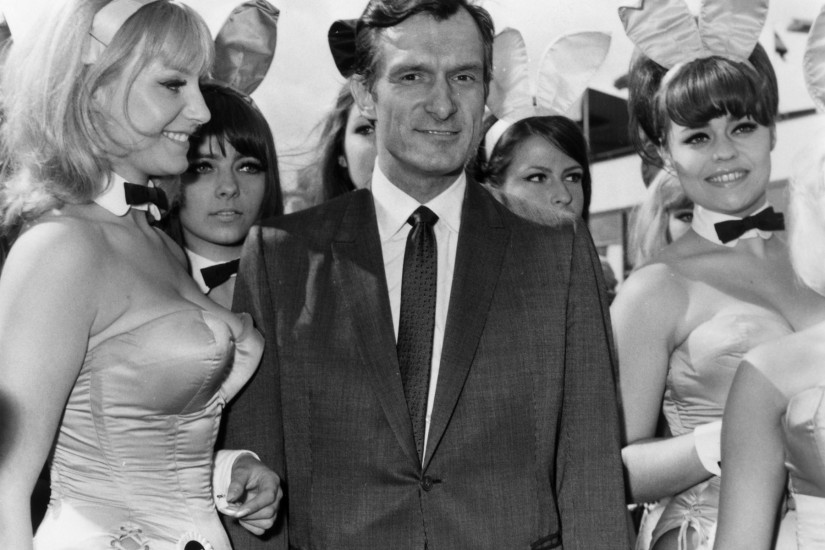 Playboy editor and tycoon Hugh Hefner is greeted by a group of bunny girls from his Playboy Clubs, upon his arrival at London Airport.
Dove/Getty Images
…

I didn’t realize yet that the issue of Playboy’s distortion of the women’s rights battle and its casual byproduct—the refusal to allow me my own voice in an article I’d been assigned to write and which had been accepted by the editors who assigned it—was much bigger than my personal defeat. For starters, Playboy’s mistreatment of the women’s point of view had more relevance to the women who worked in Hefner’s empire than to me.

I withdrew my article: it would not be published. I soon learned Playboy hired Morton Hunt to write a piece expressing Hefner’s point of view.

I wasn’t sure I’d heard the words right, but sure enough, Shelly Schlicker, a Playboy secretary, had been caught late one night in Playboy offices xeroxing Hugh Hefner’s memo about my article. Playboy’s article on the new feminism, titled “Up Against The Wall, Male Chauvinist Pig!” had just appeared and Schlicker wanted to get Hefner’s revealing memo about my piece to the press.

Her story was picked up by many underground newspapers and by Newsweek, which praised my courage and quoted a Hefner spokesman that HH still stood behind his memo. Hunt’s article astonishingly concluded by relegating the women’s movement to “the discard pile of history”; in response, Newsweek called it a “long, rambling, and rather dull article.” (A year later Newsweek hired me as their second woman writer ever.)

I laughed. Playboy’s title for Hunt’s piece (“Up Against The Wall, Male Chauvinist Pig!”) was the kind of invective I was too “ladylike” to hurl at the magazine’s editors. But I would have loved to have had the chutzpah to have said, “Up against the centerfold, MCP.”