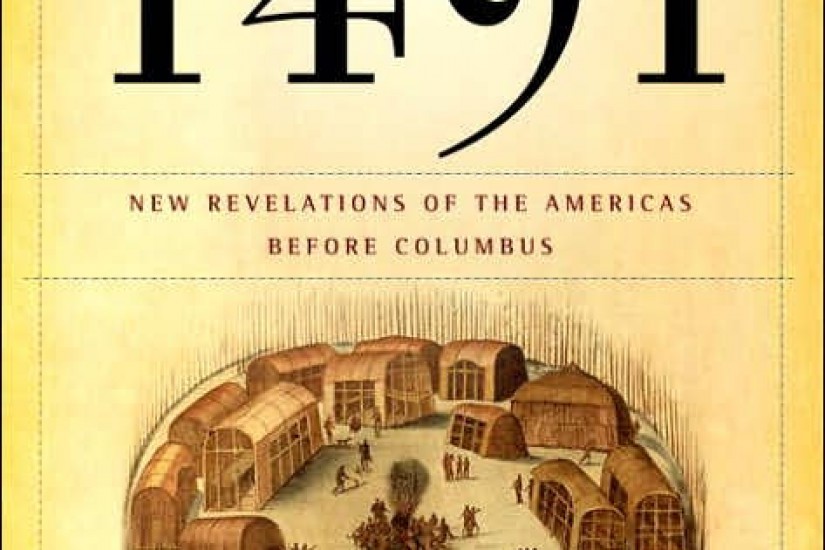 Dappled across the grasslands below was an archipelago of forest islands, many of them startlingly round and hundreds of acres across. Each island rose ten or thirty or sixty feet above the floodplain, allowing trees to grow that would otherwise never survive the water. The forests were linked by raised berms, as straight as a rifle shot and up to three miles long. It is Erickson's belief that this entire landscape—30,000 square miles of forest mounds surrounded by raised fields and linked by causeways—was constructed by a complex, populous society more than 2,000 years ago. Balée, newer to the Beni, leaned toward this view but was not yet ready to commit himself.

Erickson and Balée belong to a cohort of scholars that has radically challenged conventional notions of what the Western Hemisphere was like before Columbus. When I went to high school, in the 1970s, I was taught that Indians came to the Americas across the Bering Strait about 12,000 years ago, that they lived for the most part in small, isolated groups, and that they had so little impact on their environment that even after millennia of habitation it remained mostly wilderness. My son picked up the same ideas at his schools. One way to summarize the views of people like Erickson and Balée would be to say that in their opinion this picture of Indian life is wrong in almost every aspect. Indians were here far longer than previously thought, these researchers believe, and in much greater numbers. And they were so successful at imposing their will on the landscape that in 1492 Columbus set foot in a hemisphere thoroughly dominated by humankind.

Given the charged relations between white societies and native peoples, inquiry into Indian culture and history is inevitably contentious. But the recent scholarship is especially controversial. To begin with, some researchers—many but not all from an older generation—deride the new theories as fantasies arising from an almost willful misinterpretation of data and a perverse kind of political correctness. "I have seen no evidence that large numbers of people ever lived in the Beni," says Betty J. Meggers, of the Smithsonian Institution. "Claiming otherwise is just wishful thinking." Similar criticisms apply to many of the new scholarly claims about Indians, according to Dean R. Snow, an anthropologist at Pennsylvania State University. The problem is that "you can make the meager evidence from the ethnohistorical record tell you anything you want," he says. "It's really easy to kid yourself."

More important are the implications of the new theories for today's ecological battles. Much of the environmental movement is animated, consciously or not, by what William Denevan, a geographer at the University of Wisconsin, calls, polemically, "the pristine myth"—the belief that the Americas in 1491 were an almost unmarked, even Edenic land, "untrammeled by man," in the words of the Wilderness Act of 1964, one of the nation's first and most important environmental laws. As the University of Wisconsin historian William Cronon has written, restoring this long-ago, putatively natural state is, in the view of environmentalists, a task that society is morally bound to undertake. Yet if the new view is correct and the work of humankind was pervasive, where does that leave efforts to restore nature?