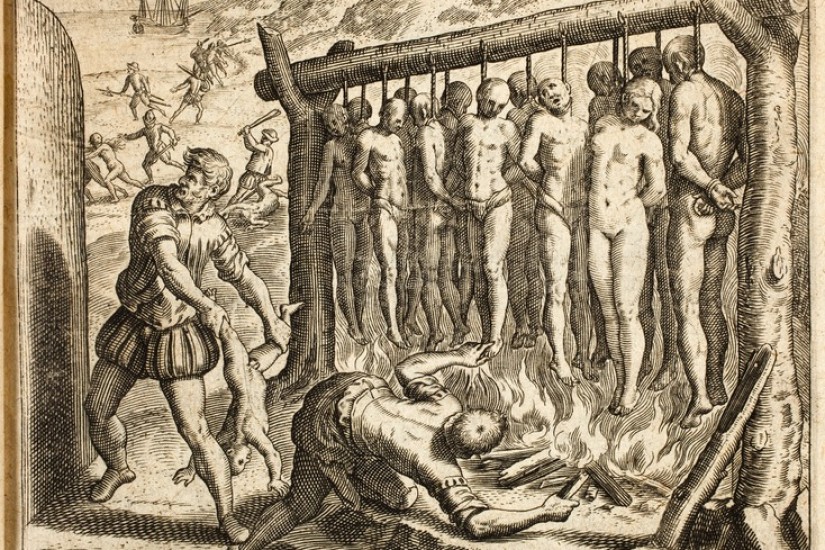 The following year, Columbus led seventeen ships that dropped 1,500 prospective settlers on Caribbean beaches. As they stayed on, relations with local Indians degenerated. What was soon imposed was “the other slavery” that the University of California, Davis, historian Andrés Reséndez discusses in his synthesis of the last half-century of scholarship on American Indian enslavement. First came the demand for miners to dig for gold. The easy-going Taínos were transformed into gold-panners working under Spanish overseers.

The Spaniards also exploited the forms of human bondage that already existed on the islands. The Caribs of the Lesser Antilles, a more aggressive tribe, regularly raided the Taínos, allegedly eating the men but keeping the women and children as retainers. A similar discrimination based on age and gender would prevail throughout the next four centuries of Indian-on-Indian servitude. As Bonnie Martin and James Brooks put it in their anthology, Linking the Histories of Slavery: North America and Its Borderlands:

North America was a vast, pulsing map of trading, raiding, and resettling. Whether the systems were pre- or postcontact indigenous, European colonial, or US national, they grew into complex cultural matrices in which the economic wealth and social power created using slavery proved indivisible. Indigenous and Euro-American slave systems evolved and innovated in response to each other.

Taínos who resisted the Spanish were set upon by dogs, disemboweled by swords, burned at stakes, trampled by horses—atrocities “to which no chronicle could ever do justice,” wrote Friar Bartolomé de las Casas, a crusader for Indian rights, in 1542. Against the Caribs the Spaniards had a tougher time, fighting pitched battles but capturing hundreds of slaves as well. Columbus sailed home from his second voyage with over a thousand captives bound for slave auctions in Cádiz (many died en route, their bodies tossed overboard). He envisioned a future market for New World gold, spices, cotton, and “as many slaves as Their Majesties order to make, from among those who are idolators,” whose sales might underwrite subsequent expeditions.Thus did the discoverer of the New World become its first transatlantic human trafficker—a sideline pursued by most New World conquistadors until, in the mid-seventeenth century, Spain officially opposed slavery. And Columbus’s vision of a “reverse middle passage” crumbled when Spanish customers preferred African domestics. Indians were more expensive to acquire, insufficiently docile, harder to train, unreliable over the years, and susceptible to homesickness, seasickness, and European diseases. Other obstacles included misgivings by the church and royal authorities, which may explain Columbus’s emphasis on “idolators” like the Caribs, whose status as “enemies” and cannibals made them more legally eligible for enslavement.