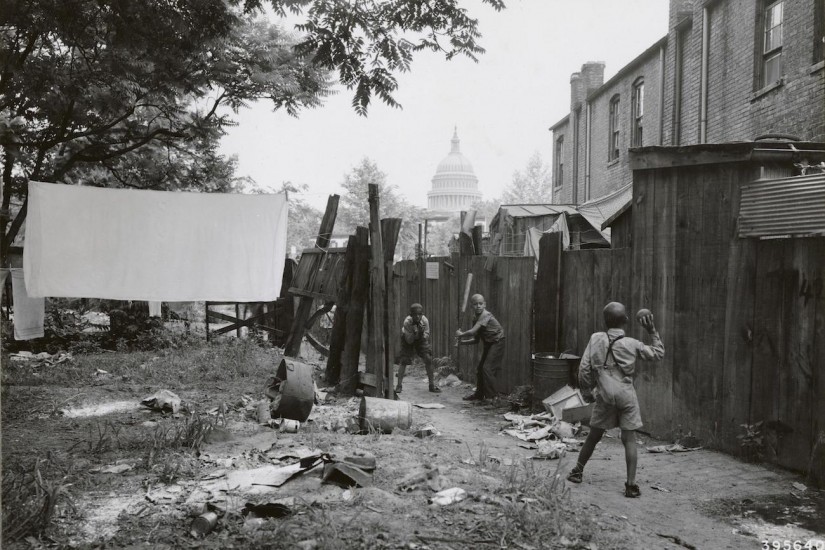 Children playing in a Washington, D.C. slum area near the Capitol (1940).
Carl Mydans/Library of Congress
…

Let’s start at the beginning. What is the genesis of the racial wealth gap?

It all starts with slavery. When we fought over slavery and, as an institution, it dissolved, we never confronted the justifications around it. Those things lingered, and so did this desire, this need—especially in the South—to use blacks as labor and not capital. Black bodies were capital, but blacks themselves could not control capital. They had to be labor. That lingered well after slavery.

In order to create wealth, you need capital. And if you are capital, and if you’re only subscribed to labor based on Jim Crow laws—which is exactly the purpose for Jim Crow in the southern economy, post-slavery—then you can’t build wealth. So that’s the genesis of the wealth gap. What I show in the book is that it doesn’t resolve itself. From the Civil War until today, the wealth gap has barely budged. In fact, the total amount of wealth owned by the black population has not grown at all appreciably—not noticeably—in the last 150 years.

You don’t actually need laws—and you don’t even need racists—for these things to work. You don’t need outright racism, you don’t need outright slavery for the wealth gap to perpetuate. Once you block a group of people from the mainstream arteries of commerce, they can’t create wealth. I show how the economy of segregation, the economy of exclusion, how that self-perpetuates. You don’t actually need racists for this gap to get wider and wider.

Especially now, when economic inequality is so strident, that just makes it that much more exacerbated for black people who have faced these economic injustices for centuries.

When you’re on the margin, any economic collapse hits you much harder. There’s this old adage that “When Wall Street gets a cold, Harlem gets the flu.” When you’ve got people who live in communities of concentrated poverty and generational lack of opportunity, when you add a general financial crisis to that, it really provides a shock that’s much harder to recover from. Yes, there is this trend of economic inequality, with the 1 percent separating from the 99 percent, so to speak. But this is also a separate and distinct problem apart from economic inequality. Just as inequality is tied up in banking and credit policy, black exclusion and the racial wealth gap is tied up in racial exclusion. From the channels of credit and banking that the rest of Americans were able to get generational wealth through. Post-New Deal until the late ’70s, the way that middle-class Americans gained wealth is through homeownership. All of that was given through banks and through credit facilities that were only open to certain classes of people. And they were always closed off to blacks, at first expressly, and then effectively.