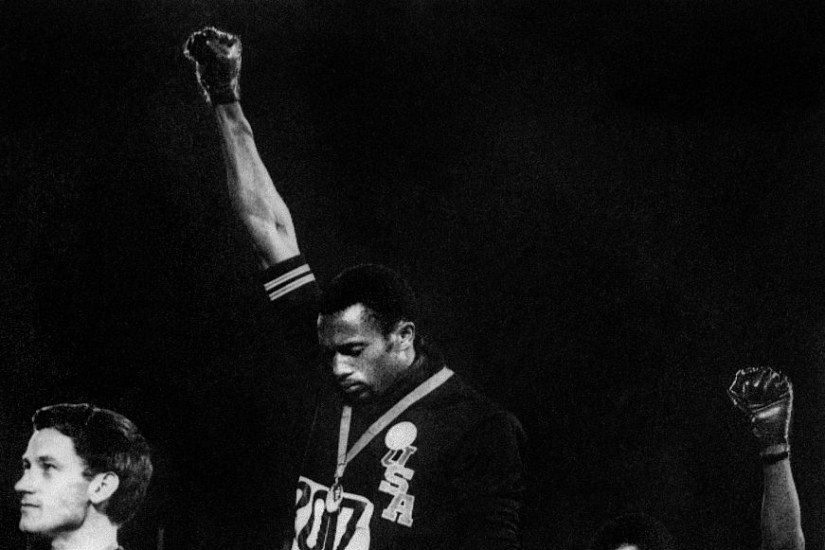 US athletes Tommie Smith and John Carlos raise their gloved fists in the Black Power salute to express their opposition to racism in the USA during the US national anthem at the Mexico Olympic Games, 1968
AFP/Getty Images
…

Collectively, black athletes refused to boycott the Mexico City Olympic Games, but some, including Smith and Carlos, decided to protest injustice on individual terms. For Smith, who participated in ROTC at SJSU, the demonstration was a rallying call for freedom in a nation that treated him “like just another nigger off the track?” His black glove represented the lack of empowerment for black people. His black scarf symbolized black pride and his lack of shoes stood for the poverty and neglect experienced by black communities in a racist nation.

Journalists virulently criticized Smith and Carlos for their demonstration. Brent Musburger, then a sports writer for the Chicago Daily News, wrote, “Smith and Carlos looked like a couple of black skinned storm troopers, holding aloft their black gloved hands during the playing of the National Anthem. It’s destined to go down as the most unsubtle demonstration in the history of protest . . . and it insured maximum embarrassment for the country that picked up their room and board bill in Mexico.” How dare these black athletes rebel?

Forty years later, ESPN honored Smith and Carlos with the Arthur Ashe Courage Award at its ESPY award ceremony. How was it that Smith and Carlos, banned by the International Olympic Committee (IOC) in 1968, came to be appreciated by 2008? Had Americans become more tolerant of black athletes? Or does the explanation lie elsewhere? Urla Hill has suggested that “Smith and Carlos have transcended their place as villainous traitors to become a sort of brand for gallantry and pluck in the face of inestimable odds.” In the face of sanction and criticism, Smith, Carlos, and a host of other black athletes in the late 1960s expressed a will for self-determination. In so doing, they tested the limits of American participatory democracy. But since that time, American popular culture has de-radicalized their protest. In ways similar to the cooption of Martin Luther King Jr., Smith and Carlos’s protest has been repackaged and removed from its original context and intentions.