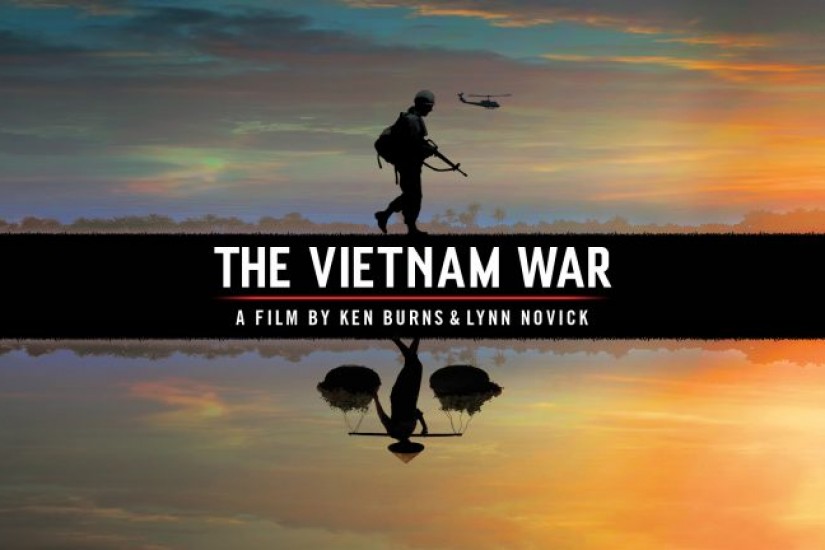 Poster for the PBS documentary &#34;The Vietnam War&#34; by Ken Burns and Lynn Novick.
PBS
…

Burns is hopelessly, irretrievably exceptionalist. This trait colors all Burns’s work with an ersatz, conjured glory. The running strategy is to place the past high on a pedestal such that we are nearly coerced into admiring it — and through it ourselves. It is a familiar thread among American historians, from 19th-century “greats” such as Francis Parkman up to well-remunerated masters of postcard prose like David McCullough. One might get away with it in a film about baseball or the Brooklyn Bridge, but Vietnam — uh-uh.

Code red: "The Vietnam War" purports to be our document of record, a film meant to bring us all together in some kind of agree-to-disagree unity. Forget it. There are two sides to every story, but in this case one is right and the other very wrong. It cannot be made otherwise, and Burns’s failure lies in his failure to acknowledge this.

Rather than write about "The Vietnam War" myself, I decided to sit with Christian Appy, a noted historian who lectures at the University of Massachusetts. Vietnam is Appy’s field, and his approach is very specific. No village studies or monographs on rice culture in the Mekong Delta. In his three books, all worth reading, Appy’s interest lies in the war, what the war did to the Vietnamese, and — this above all — what the war did to Americans. I first interviewed Appy for Salon when he published "American Reckoning: The Vietnam War and Our National Identity" two years ago. As the title suggests, Appy’s true topic is we Americans and how we account for ourselves to ourselves. He's perfect for a detached, professional analysis of the new Burns film, and that is what I got.