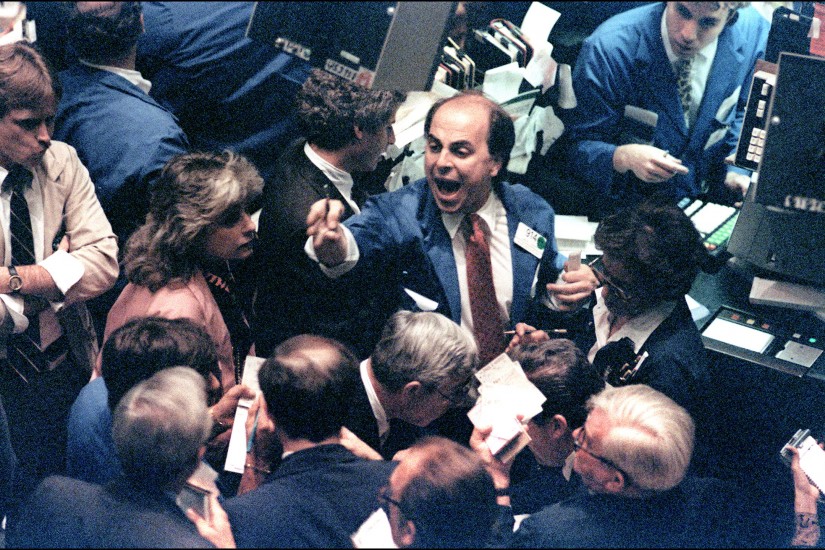 A file photo dated 19 October, 1987 shows a trader (C) on the New York Stock Exchange shouting orders as stocks were devastated during one of the most frantic days in the exchange's history.
Maria Bastone/AFP/Getty Images
…

Black Monday, as the day became known, is part of financial history’s fossil record, a divide between old and new markets. It was the first significant instance of computer-driven trading run amok. The nascent equity options market saw assumptions based on the Black-Scholes model overturned and replaced by a more complex world of volatility skews. And Federal Reserve Chairman Alan Greenspan, just two months on the job, got to glimpse a market panic and sell his first “­Greenspan Put” under the U.S. equity market.

To mark Black Monday’s 30th anniversary, Bloomberg Markets asked players throughout the marketplace to reflect on the day and its lasting impact. While everyone remembers the 31.25 percent decline in IBM, the real Black Monday story is less about the carnage in equities than what happened elsewhere—in options, futures, and fixed income. There’s also the story of Tuesday, with all its trading and never fully explained (until now!) rally. Most of the people willing to share their memories count themselves as winners who seized the moment as an opportunity not only to make money, but also to insert themselves in the new financial order—Paul Tudor Jones, Stanley Druckenmiller, Nassim Nicholas Taleb. Their story, and the story of Black Monday, is the birth story of modern financial markets—a wild ride of shock, angst, and, for some, glory.