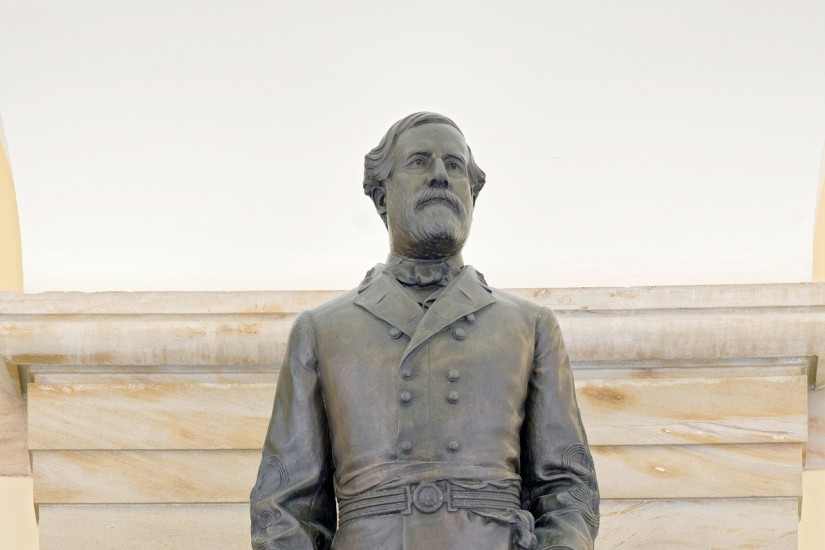 Statue of Robert E. Lee in Statuary Hall of the US Capitol building.
Flickr.com/USCapitol

Captured in a bronze likeness, Robert E. Lee stares off into the distance. He seems deep in thought — perhaps mulling an alternate history of victory in which the general who led the Confederate Army emerges victorious.

The statue, still standing today in the U.S. Capitol building, is part of the National Statuary Hall Collection of 100 sculptures of founding fathers and luminaries from all 50 states. The statue, sculpted by Virginia artist Edward Valentine, depicts Lee wearing his Confederate uniform and carrying a hat in hand, signs of the humility and noble surrender that Lee loyalists claimed were his greatest trait and accomplishment. In 1909, Valentine’s memorial to Lee joined sculptures to other historical movers and shakers in the Hall.

But Senator Weldon B. Heyburn, an Idaho Republican, would have none of it. The following year, in January 1910, Heyburn let loose with a hell-raising speech that, according to newspaper reports of the time, called the placement of the general’s statue in the Capitol a “desecration” and compared Lee to an infamous suspected traitor from another time.

“Do you think that those men in Congress on the 2nd of July 1864 [when passing legislation that created the Statuary Hall] ever contemplated for a moment that any state, under any condition, at any time, would place the statue of Benedict Arnold in that hall?”

A man whose physical girth that would rival future President William Howard Taft’s (whose size inspired a presidential “urban legend” about getting stuck in the White House bathtub), Heyburn never lacked for opinions. He championed Western states and railed that the federal government should not have the power to establish protected national forests — an argument that played well with mining interests he often represented as a lawyer even while in Congress. He resisted child labor laws and shorter workweeks, charging that regulation would gut free enterprise. But even as his pet issues conflicted with many tenets of the Progressive period — during which many Americans looked to the government to tackle social ills in a rapidly changing country — Heyburn was a main sponsor of the Pure Food and Drug Act that laid the groundwork for today’s Food and Drug Administration.

During his decade-long congressional career, Heyburn became one of the Senate’s best-known contrarians — and the most voluble opponent of anything that hinted of sympathy for the Old South.