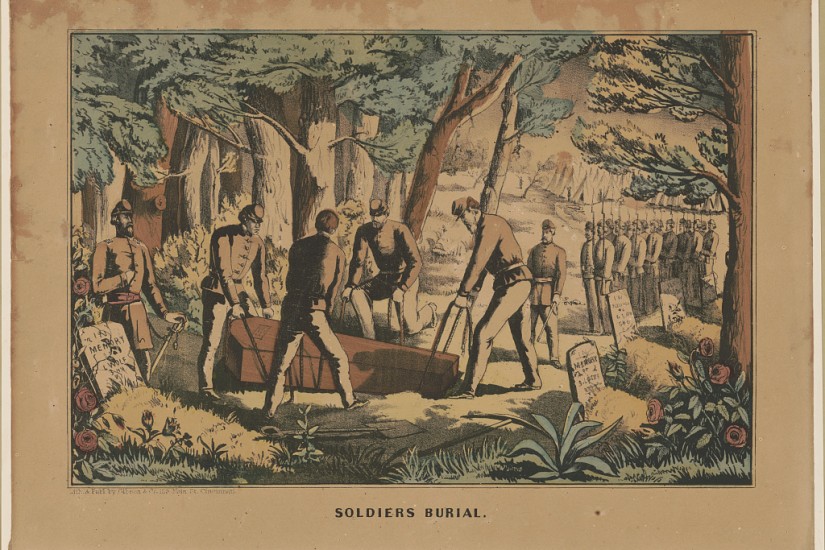 There are only so many ways to deal with the dead: remember or forget, put up statues or pull them down, bury or burn. Heth is an edge case, like a head on a pike, or a mass grave, or a man hanging from a gallows, a display of decay, a spectacular atrocity. But the edge is not so far from the viscera. Frederick Douglass called slavery a tomb. The way Americans still bury their dead is a consequence of the war that was fought to end it.

“We cannot consecrate, we cannot hallow, this ground,” Lincoln said at Gettysburg. But bodies could be embalmed and brought home, to be seen, one last time, beloved and mourned. A business grew. Before the war, families washed and shrouded and carried their own dead, burying them in boxes built of softwoods like pine and cedar. During the war, families hired undertakers to preserve their sons long enough to bring them home from distant battlefields on railway cars. “Night and day journeys a coffin,” Walt Whitman wrote. Gravestones filled the fields like poppies. There were fields of black and fields of white. In 1868, when the radical Republican Thaddeus Stevens was on his deathbed, weeks after the ratification of the Fourteenth Amendment, which he’d drafted, he insisted on being buried in an integrated cemetery. He wrote his own epitaph:


I repose in this quiet and secluded spot,
Not from any natural preference for solitude
But, finding other Cemeteries limited as to Race,
by Charter Rules,
I have chosen this that I might illustrate
in my death,
The principles which I advocated
through a long life:
EQUALITY OF MAN BEFORE HIS CREATOR.
Cemeteries remained segregated for another century.

After the war, coffins and cemeteries got fancier and embalming more elaborate. There is no need to preserve a body that has no distance to travel before burial, but preparing the dead by pickling them and sealing them in boxes made of hardwoods and unbreachable metals turned out to be a good business: the denial of decay. The price of dying rose. It used to be that you pretty much had to be famous to get your name on your grave; after the Civil War, nearly everyone did, except the poorest of the poor, interred in potter’s fields. Then, too, remains were dug up, and moved: it became fashionable to relocate the eminent dead to better quarters, to elevate them above the more ordinary departed. Very often, monuments were built in places that lacked the bodies, creating more permanent markers.