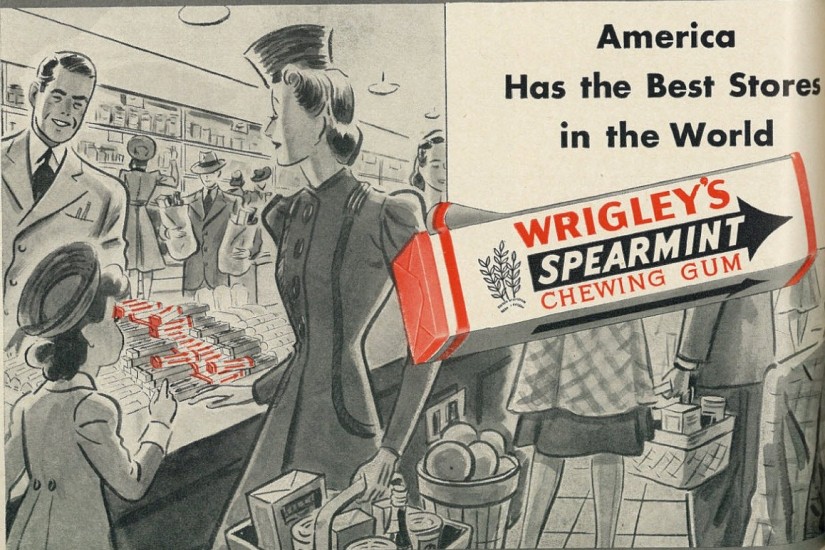 A 1941 advertisement for Wrigley's Spearmint Gum that appeared in Women's Day.
Classic Film/Flickr

Quick! Name a gum manufacturer. Chances are you chose Wrigley, a gum behemoth that’s been around since the 1890s. But how did the company go from baking powder purveyor to the world’s largest gum manufacturer? As Daniel Robinson explains, it had a little help from some made-up—and quintessentially American—ailments.

Robinson tracks the company’s marketing history as it grew into a gum powerhouse. Its strength, he argues, was in its position at the intersection between business and popular culture. William Wrigley, Jr., the company’s founder, was a soap salesman and a kind of child prodigy of consumerism. At just 13 years of age, he made a name for himself peddling soap for his father throughout New England, and eventually found himself in Chicago pitching rubber stamps, newspapers, and soap. This varied experience—especially in the rubber stamp industry—taught him about the power of advertising in a rapidly changing mass media marketplace.

Because he was a traveling “drummer,” writes Robinson, Wrigley adopted a role of itinerant mystery, on the fringes of acceptable society. That near-mythical presence prepared him well for his future in advertising.

And what a future. Wrigley originally turned to chewing gum as a way to bring attention to his premium baking powder, which began to surpass his own soap sales in the early 1890s. He’d include gum along with the baking powder as a kind of cheap, compact, compelling premium.

Wrigley may not have come to gum first, but he brought a salesman’s savvy to the product.