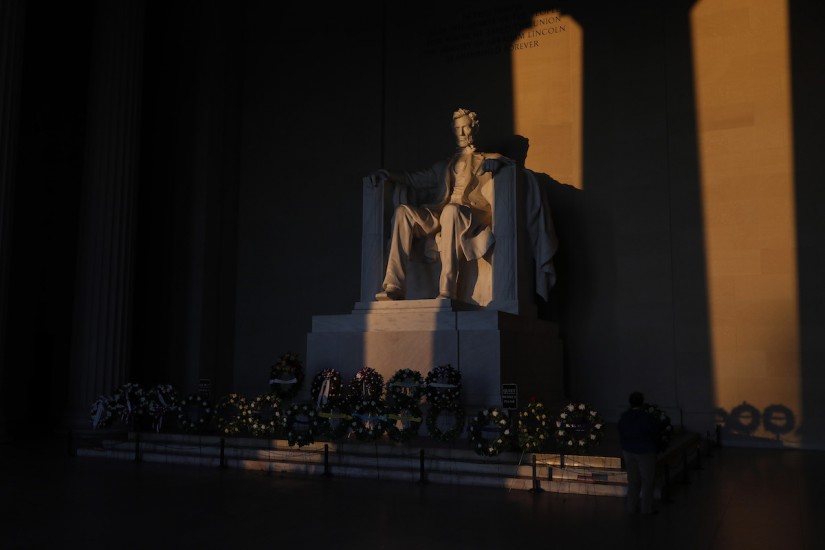 Wreaths lay at the base of the Lincoln Memorial on President's Day.
Aaron Bertstein/Getty Images
…

This is the history of politics as a history of politicians. Yet on the politicians themselves, Blumenthal delivers the goods. Although Lincoln did not found the mass antislavery movement, when it arrived in 1854, he soon became one of its indispensable leaders: “at first he dodged them,” Blumenthal notes; “but then he led them.” It was Lincoln’s historic task to grasp the constitutional edifice developed by Chase and others and add the democratic muscle required to forge the new majority they had envisioned. This he began to do with a series of remarkable speeches, in which he drew on all the rhetorical and strategic resources of his apprenticeship in antebellum politics. Lincoln ranged selectively but effectively across history in order to prove that “our revolutionary fathers” had really fought to end slavery. He dressed philosophical principle in the homespun garb of common sense: “What I do say is, that no man is good enough to govern another man, without that other’s consent.” Above all, he linked the struggle against the master class to the broader cause of popular democracy: The extension of slavery, as Lincoln wrote, “enables the first FEW to deprive the succeeding MANY, of a free exercise of the right of self-government.”

In the landscape of antebellum America, this amounted to a revolutionary political program. The Republicans sought to contain slavery in order to isolate and terminate it—to put it on the road to “ultimate extinction,” as Lincoln said in 1858. For decades, that kind of antislavery commitment had lived only on the leftmost fringe of American politics. (As recently as 1852, the Free Soil Party, with a similar anti-?slavery platform, attracted just 4.9 percent of the national vote.) Yet through the new Republican Party, as Blumenthal notes, “what had been marginal and peripheral could be brought into a new center.”

Given the course of Blumenthal’s own political career, this point bears emphasis. The centrist position in the 1850s was straightforward: Restore the Missouri Compromise, no less and no more, without any additional cant about overthrowing the Slave Power or blocking all forms of slavery’s expansion. For an antebellum Dick Morris or Mark Penn, this path would have been obvious, and the road to electoral victory clear. But Lincoln fought to remake the center—not to compromise under its immovable weight. On the question of slavery’s future, Lincoln became the Great Uncompromiser.