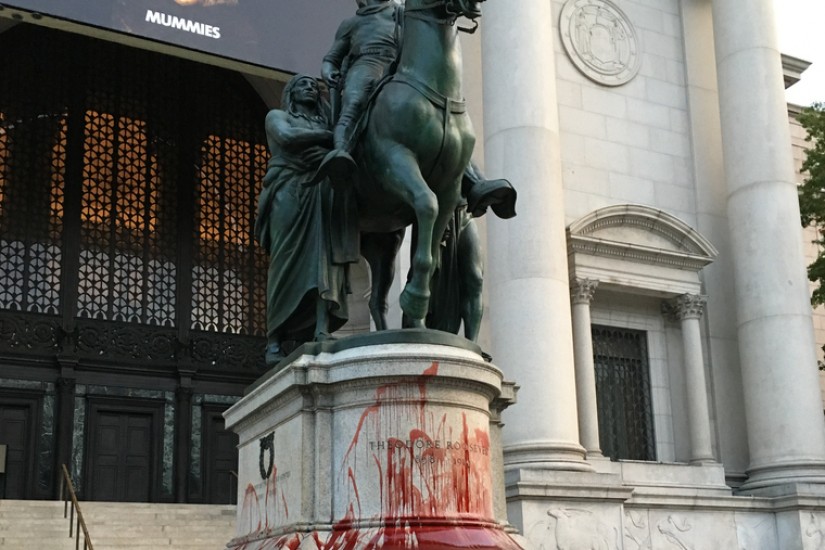 A group calling itself the Monument Removal Brigade (MRB) has claimed responsibility for today’s early morning defacement of the controversial Theodore Roosevelt monument that stands outside the American Museum of Natural History (AMNH). The base of the 10-foot-tall equestrian statue was splashed with red paint around 5:30am, creating a grisly scene at the bottom of the museum’s steps. MRB, whose members remain anonymous, described the action to Hyperallergic as a “counter-monumental gesture that does symbolic damage to the values [the statue] represents: genocide, dispossession, displacement, enslavement, and state terror.” It marks the latest in a string of rogue acts around the country to eradicate controversial statues and monuments, which spiked in number after white supremacists and neo-Nazis gathered in Charlottesville, Virginia to stop the removal of a Robert E. Lee monument.

“Now the statue is bleeding,” the group of anonymous protestors wrote in a statement sent to Hyperallergic. “We did not make it bleed. It is bloody at its very foundation. This is not an act of vandalism. It is a work of public art and an act of applied art criticism. We have no intent to damage a mere statue.

“The true damage lies with patriarchy, white supremacy, and settler-colonialism embodied by the statue,” the statement continues. “It is these forms of oppression that must be damaged again and again … until they are damaged out of existence.”

Tom Finkelpearl, the commissioner of the city’s Department of Cultural Affairs — under whose jurisdiction the monument falls — disagrees with the group’s tactics. In a statement sent to Hyperallergic, he said: “There’s no place for vandalism in this conversation.”

MRB goes on to highlight Roosevelt, the white supremacist and imperialist — as opposed to Roosevelt as defined by inscriptions on his statue’s base and along the terrace’s parapet wall: explorer, scientist, conservationist, naturalist, ranchman, scholar, statesman, author, historian, humanitarian, soldier, patriot. MRB specifically calls out his role in the Spanish-American War, which led to the US’s annexation of Puerto Rico, Hawaii, Guam, and the Philippines as well as his staunch endorsement of eugenics.