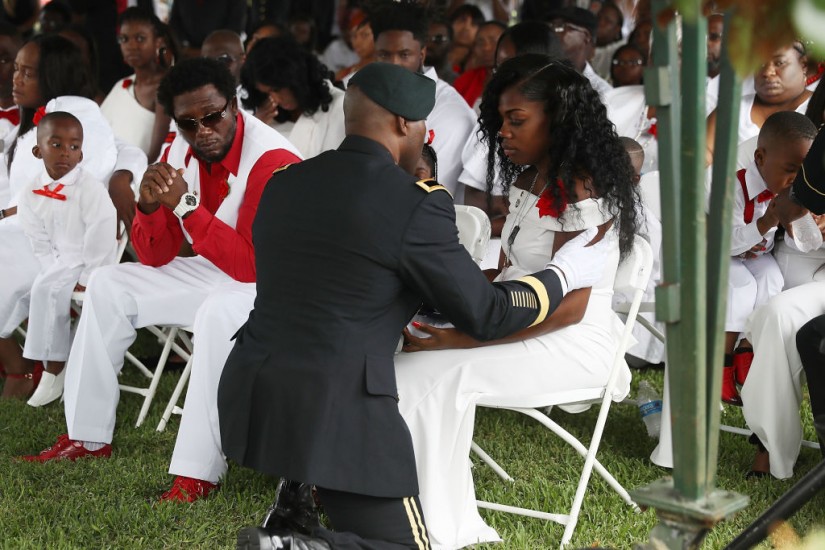 HOLLYWOOD, FL - OCTOBER 21: Myeshia Johnson is presented with a folded American flag by a military honor guard member during the burial service for her husband U.S. Army Sgt. La David Johnson at the Memorial Gardens East cemetery on October 21, 2017 in Hollywood, Florida. Sgt. Johnson and three other American soldiers were killed in an ambush in Niger on Oct. 4.
Joe Raedle/Getty Images

When President Donald Trump publicly questioned the widow of a slain Green Beret on Monday morning, it was typical of the president’s disdain for decorum, his stubborn aggressiveness, and his penchant for impulsive behavior. In some ways, it echoed his attacks on Sen. John McCain in the early days of the Republican presidential primary.

That Sgt. Johnson was black, and Myeshia Johnson is black, are not incidental details in this story. They are the context which gives this confrontation particular resonance in American history, and makes it so fraught with meaning. From its inception, this country has had an ambivalent relationship with the idea of black military service, to say nothing of individual black soldiers and their families.

The 1775 Continental Congress didn’t exclude black Americans when it created an army for the fledgling American independence movement, but it wasn’t eager to arm them either. Before the end of that year, notes the late historian Bernard C. Nalty in Strength for the Fight: A History of Black Americans in the Military, Gen. George Washington and his officers would agree “unanimously to reject all slaves” and by a great majority agree to “reject negroes altogether.” Military necessity changed the policy; by 1780, Maryland accepted individual black recruits, and the once-reticent Continental Congress called on South Carolina and Georgia to raise a force of 3,000 black troops who would receive freedom in return for service. But delegates from both colonies rejected the proposal.

Ultimately 5,000 black Americans served in the Continental Army, establishing a tradition of black military service that persists to the present. But while blacks have fought in each of the country’s wars and conflicts, it’s not been until recently that their participation was welcome. And the reasons have always been tied to the nation’s race hierarchy.