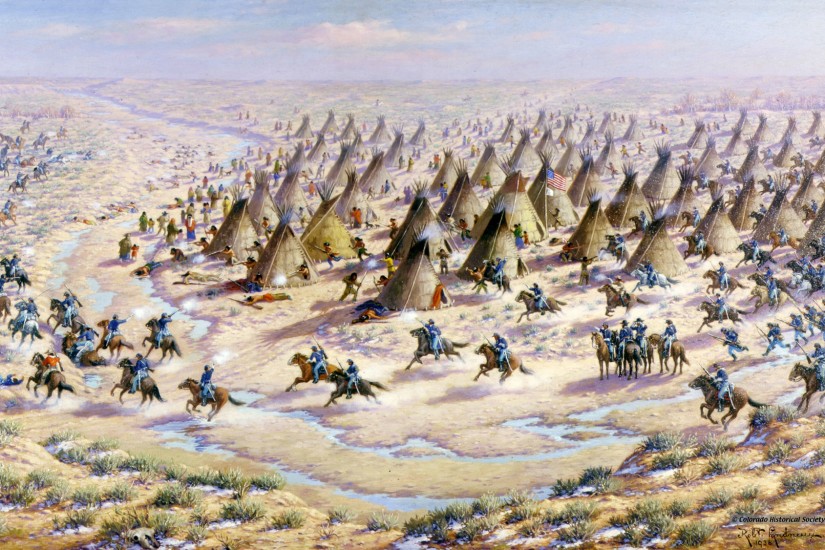 &#34;The Sand Creek Massacre&#34; painted in 1936 by Robert Lindneaux, portrays the assault on the peaceful Cheyenne and Arapaho village by the U.S. Army.
History Colorado
…

The Colorado Civil War Monument, erected in 1909, stands right outside the state capitol in Denver. It is not a tribute to the Confederacy. The statue atop the plinth honors an anonymous soldier—of the Union. Engraved on it are the names of Union military commanders and a list of the Civil War battles that were fought in what was then Colorado Territory. The roster of heroes includes Col. John Chivington, and Sand Creek is named as one of the battles—something it never was.

And yet, in the minds of Coloradans, in the 1860s and for many decades after, that’s exactly what it was. Our tortured national struggle over the enduring legacy of the Civil War has all been about the South. Absent from the debate has been any mention of the Civil War in the West, and the fact that violent white supremacism was not the monopoly of the Confederacy.

Sand Creek did not just happen at the same time as the Civil War. It, as well as many other mass killings, was seen in the West (and by military commanders in the East) as a function of that war, an auxiliary battlefront. If Chivington’s men were unusually cruel, it was because the intense pressure on the Union Army east of the Mississippi made it necessary to enlist poorly trained and ill-disciplined volunteers in the West. The roots run much deeper, however, going back to the gold rush in the mountain states. This led, as it had previously in California, to the violent dispossession of the tribes who had the misfortune to live in the area of the gold strikes—Cheyenne, Arapaho, Ute, Shoshone, Nez Perce—and the abrogation of the treaties that had been made with them. But more than that, western gold was desperately needed for the flagging Union war effort.