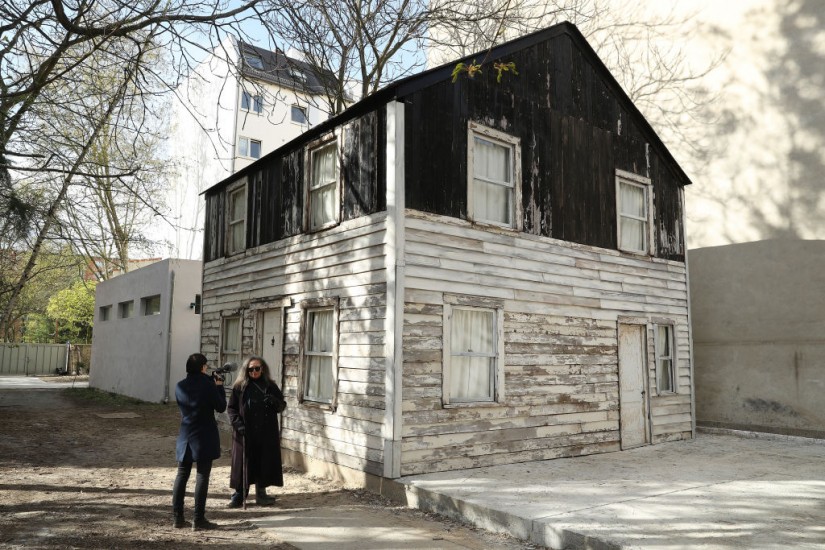 Rhea McCauley, right, a niece of Rosa Parks, talks to a journalist in front of a home where Parks had lived in Detroit. The home had been saved from demolition and moved to Germany by American artist Ryan Mendoza (April 6, 2017).
Sean Gallup/Getty Images

“Rosa Parks House in Berlin Has a Ticket Home to America,” the headline proclaimed. In 2016, Ryan Mendoza, an American artist based in Germany, deconstructed a wood-frame home Rosa Parks stayed in when she first moved to Detroit, and shipped it in two containers to Berlin. The home had originally belonged to Parks’ younger brother, Sylvester McCauley.

Like many homes in Detroit, it had been slated for demolition until Mendoza, in concert with Parks’ niece Rhea McCauley, saved it. News outlets across the country broadcast the story. Mendoza reconstructed the house in Berlin, and media wrote follow-up stories featuring photos of the rebuilt home. And now the tale had a happy ending; the Nash Family Foundation in Manitowoc, Wis., had committed $45,000 to return the house to the U.S.

But the history the house signifies is much more sobering than these news stories spin. Using this house to remember Parks means facing her struggle, not just in Montgomery, Ala., but in the Jim Crow North. It means seeing the Detroit that Rosa Parks arrived at in 1957, which had widespread housing segregation, police injustice and a discriminatory job market, as well as a long-standing black freedom movement she became part of for four decades.

At a moment when public attention has turned to the question of which history is publicly memorialized, this offers an opportunity to mark black life in the North, and the struggle against Northern segregation and racial injustice that continues to define our country today.