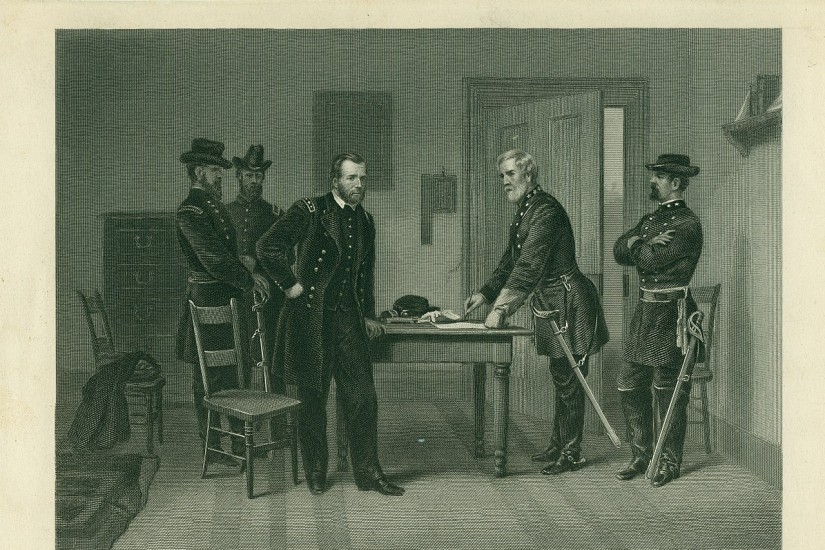 A print of General Robert E. Lee surrendering to General Grant. From &#34;History of the War for the Union,&#34; 1867.
Wikimedia Commons / Missouri History Museum / Alonzo Chappel
…

John Kelly and Sarah Sanders’s emphasis on “compromise” is part of a larger understanding of the American story, which historians call the “reconciliationist” narrative.” As developed by turn-of-the-century scholars like Ulrich B. Phillips and William Archibald Dunning (father of the influential “Dunning School.”), the reconciliationist narrative told a false, sweeping story about American race relations: that slavery was a mostly benign institution, and antebellum America was bedeviled by fanatical abolitionists committed to the false idea of human equality. The extremism of both the abolitionists and secessionists, the argument goes, prevented any compromise between North and South, which led to the Civil War. After the war, the abolitionists pushed for Reconstruction, which created a corrupt central government and the empowerment of African-Americans who were not ready for democracy. This led to a necessary resistance from the South in the form of the Ku Klux Klan. Peace was achieved only by ending Reconstruction with the Compromise of 1877, leading the white South to be reconciled with the North.

Stated in such bald terms, the reconciliationist narrative seems like pure apologia for the white supremacy. But the major themes of this version of history (the tragedy of failed compromise) often shapes the perception of people who would reject an overt declaration of the neo-Confederate point of view. In early 2016, Hillary Clinton was asked which president she most admired. She chose Lincoln, and offered a view of him that can be described as Reconciliationist Lite.