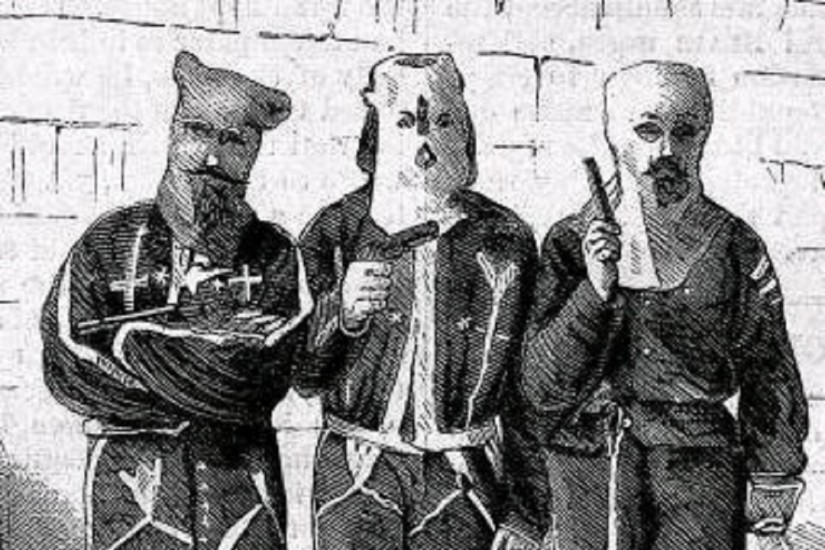 Three Mississippi Ku Klux Klan members in disguises. Taken from an 1872 issue of Harper's Weekly about their capture (1872).
Harper's Weekly/Wikimedia
…

The Klan’s crimes across the interior of South Carolina reached their saturation point around the time of Williams’ murder. His was just one of many black bodies recovered in the Klan hotbeds of York County (remains were still being found in the area 20 years later). Gov. Robert Scott, a veteran of the Union Army who moved south to aid Reconstruction efforts, pleaded for federal help. The Ku Klux Klan may have seemed merely a ghoulish attempt to scare people when it first spread from its founding chapter in Tennessee in 1865, but Scott contended it became “a terrible fact, an armed organization, thoroughly equipped, having its field, staff and line officers, and established lines of communication.” There was a war on, this time with only one side fighting.

Scott extracted promises of peace from local white power brokers with Klan ties only to watch violence resume. He could not call on state militias because they’d been disbanded for the safety of the militiamen; the so-called Kukluxers had outgunned them. In fact, the closest thing to a working militia in South Carolina was the Klan itself. The seriousness of the problem became impossible to avoid, working its way to President Ulysses S. Grant. Grant promised “prompt and decisive” federal action to a visiting delegation from South Carolina. Strategists at the War Department, the forerunner of the Department of Defense, began to rearrange their map of United States Army regiments to free up forces and zeroed in on a battle-tested officer named Lewis Merrill to lead the unusual engagement.

Maj. Merrill, having drawn the assignment, had to confess he had doubts about the stories he’d heard of Ku Klux Klan dominance in South Carolina. “Let me put it stronger even than that,” Merrill said when recalling his thoughts upon receiving his next post while stationed in Kansas. “I was absolutely incredulous.” His superior officer warned him that the reality of the Klan’s terrorism was worse than rumors could convey. Whatever else he thought he might be up against, the 36-year-old Maj. Merrill could never imagine how this mission would reshape his life and legacy.