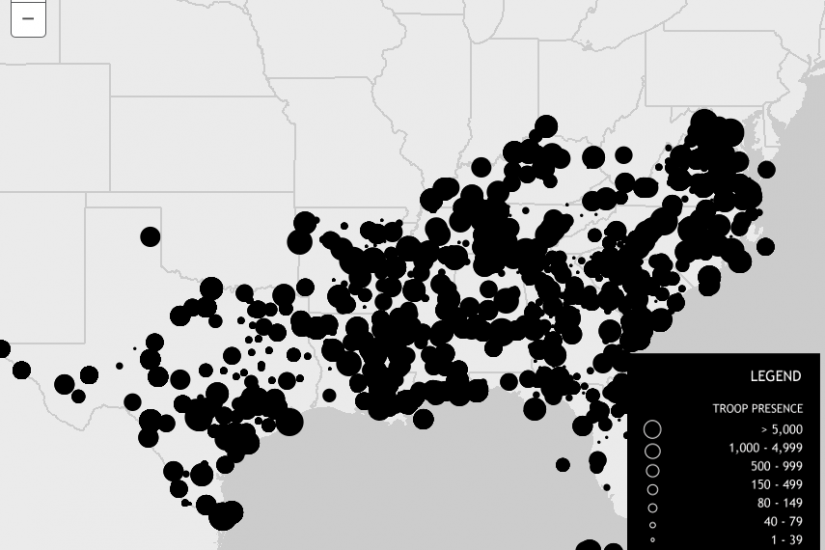 A map of U.S. Army posts during Reconstruction.
Mapping Occupation/University of Georgia

From the start of the Civil War and through the 1870s, the U.S. Army remained the key institution that newly freed people in the South could access as they tried to defend their rights.  While slaves took the crucial steps to seize their chance at freedom, soldiers helped convince planters that slavery was dead, overturned local laws and court cases, and in other ways worked with freed people to construct a new form of federal power on the ground.

Although the Army was central to shaping the development of civil rights, its role is often misunderstood or forgotten.  In part this is because of the way historians tell the story of Reconstruction.  After former rebels and Southern-sympathizing historians of the early 20th century created wildly exaggerated tales of “bayonet rule” by the U.S. Army, scholars over the last half century have worked to undercut those myths and legends.  But in the process, many of the best works of history have dismissed the idea that there was a significant occupation of the South; instead they, understandably but inaccurately, often portray the government during Reconstruction through the much-smaller and weaker Freedmen’s Bureau.

Even basic data about where the Army was, in what quantities, and with what types of troops has been difficult to find. This project utilizes the first-ever thorough dataset of the Army's presence both to argue for the Army's importance and to provide information for other historians and students to advance new interpretations about the multi-sided battle for control on the ground in the South between freedpeople, ex-rebels, white loyalists, and the federal government.

Mapping Occupation reorients our understanding of the Reconstruction that followed Confederate surrender by presenting new views of southern political space.  It argues that U.S. power existed where the government could enforce its laws through the Army.  Army installations formed the centers of patchwork zones of occupation.  These zones were linked and extended by the southern rail network as the Army responded to political pressure and events on the ground. Mapping Occupation also visualizes the more limited areas from which black southerners could reach soldiers, highlighting the unequal geography of the Army and the civilians who used it to assert their rights. Viewers can use these maps as a guide through a complex period, a massive data source, and a first step in capturing the federal government's new reach into the countryside.