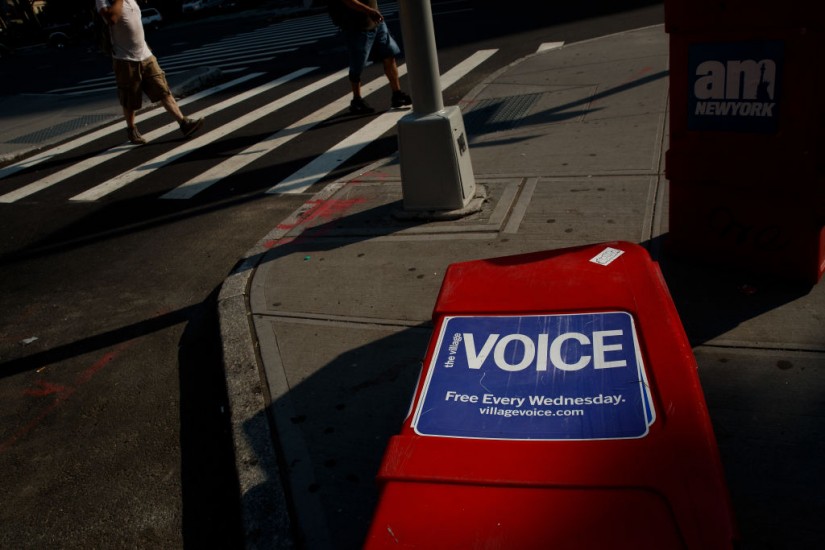 A Village Voice newspaper stand lays on the ground in the East Village neighborhood in Manhattan, August 22, 2017.
Drew Angerer/Getty Images
…

. But for all the specific changes at the Voice itself, there is a bigger problem across the media in general: declining ad revenues, and, in particular for alt-weeklies, the full-scale migration of classified ads from print to the internet. The Voice's future as a newspaper may have just reached its denouement, but it's been a long time coming.

The Village Voice was the publication that invented the concept of the alt-weekly newspaper, and indeed much of the irreverent, speaking-truth-to-power brand of journalism that we take for granted today. (Ironically, the news came on the one-year anniversary of the end of Gawker, a spiritual nephew for the internet age.) For decades, the Voice set the agenda for the cultural calendar of New York's underground music and arts scene, and influenced dozens of other papers around the country. For many who read the Voice it was a similar gateway, the definition of urban cool, and generations of young writers grew up fantasizing about seeing their byline printed on its pages. Many of those writers, including myself, eventually did, but the history of people who cut their teeth in the Voice is as impressive as any in American letters. A group of them, including Ta-Nehisi Coates, and Voice stalwarts Tom Robbins, Michael Musto, and Robert Christgau, recently signed onto a letter petitioning the paper to meet the conditions of the Village Voice Union, who were attempting to renegotiate their contracts, something that may or may not have factored into Barbey's decision, depending on whom you ask.

Neither the Voice's editor, Stephen Mooallem, nor Barbey immediately responded to Esquire's interview requests, but in a press release Barbey said:
"For more than 60 years, The Village Voice brand has played an outsized role in American journalism, politics, and culture. It has been a beacon for progress and a literal voice for thousands of people whose identities, opinions, and ideas might otherwise have been unheard. I expect it to continue to be that and much, much more."

Over the past 24 hours, I've reached out to writers and editors from multiple eras of the paper's existence to reflect on what the Voice meant for them, and the culture at large, based on their individual subjective memory. Excerpts of those conversations are below, lightly edited for clarity.