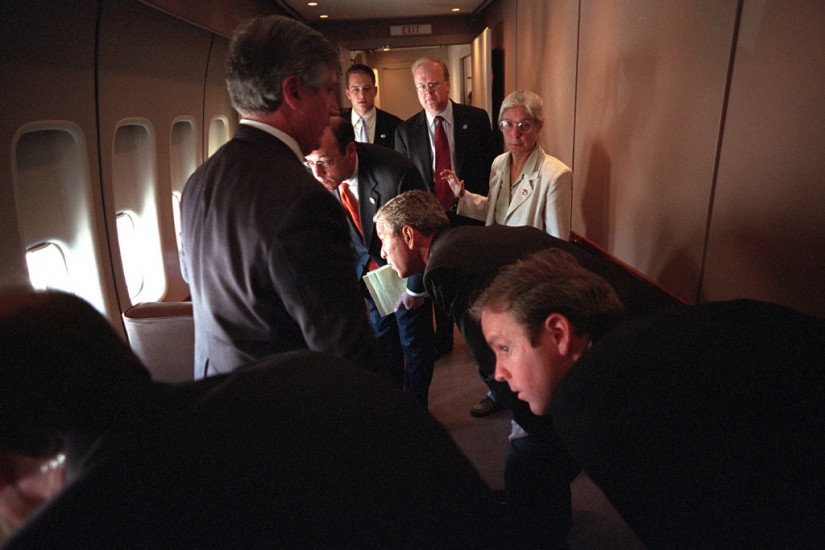 President George W. Bush and his staff look out the windows of Air Force One at their F-16 escort on September 11, 2001.
flickr.com/usnationalarchives

Nearly every American above a certain age remembers precisely where they were on September 11, 2001. But for a tiny handful of people, those memories touch American presidential history. Shortly after the attacks began, the most powerful man in the world, who had been informed of the World Trade Center explosions in a Florida classroom, was escorted to a runway and sent to the safest place his handlers could think of: the open sky.

For the next eight hours, with American airspace completely cleared of jets, a single blue-and-white Boeing 747, tail number 29000—filled with about 65 passengers, crew and press, and the 43rd president, George W. Bush, as well as 70 box lunches and 25 pounds of bananas—traversed the eastern United States. On board, President Bush and his aides argued about two competing interests—the need to return to Washington and reassure a nation and the competing need to protect the commander in chief. All the while, he and his staff grappled with the aftermath of the worst attack on American soil in their lifetimes, making crucial decisions with only flickering information about the attacks unfolding below. Bush struggled even to contact his family and to reach Vice President Dick Cheney in the White House bunker.

The story of those remarkable hours—and the thoughts and emotions of those aboard—isolated eight miles above America, escorted by three F-16 fighters, flying just below the speed of sound, has never been comprehensively told.

This oral history, based on more than 40 hours of original interviews with more than two dozen of the passengers, crew and press aboard—including many who have never spoken publicly about what they witnessed that day—traces the story of how an untested president, a sidearm-carrying general, top aides, the Secret Service and the Cipro-wielding White House physician, as well as five reporters, four radio operators, three pilots, two congressmen and a stenographer responded to 9/11.