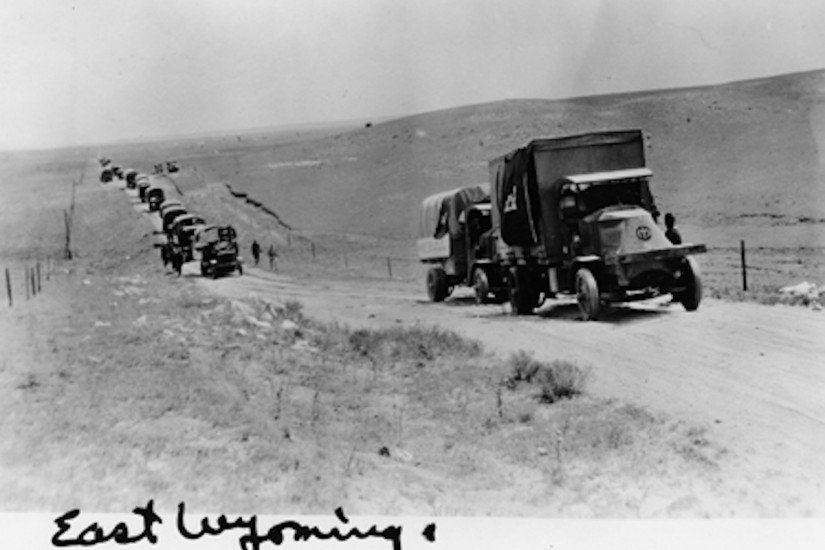 Toward the end of the 19th century, the popularity of bicycles and the advent of the automobile gave rise to a movement calling for better quality roads across the United States.

The first transcontinental roadway, the Lincoln Highway, was opened in 1913, running from New York City to San Francisco.

In 1919, the U.S. Army Motor Transport Corps deployed a convoy of military vehicles on an ambitious cross-country journey.

The objectives of the trip were fourfold: encourage the construction of transcontinental highways, recruit troops for the Motor Transport Corps, demonstrate the use of military motor vehicles to the public, and evaluate the performance of different vehicles on various terrains and grades.

Tagging along as an observer was Brevet Lieutenant Colonel Dwight D. Eisenhower, who decades later would make the Interstate Highway System the supreme accomplishment of his presidency.

The convoy consisted of 81 total vehicles and nearly 300 men and officers.

After passing through Illinois, they encountered virtually no paved roads until California.

Even with engineers scouting and preparing the terrain ahead, the convoy logged 230 “incidents” on the trip, including stops to repair or adjust vehicles, extricate vehicles from mud, sand or ditches, and accidents and collisions.

In Eisenhower’s estimation, many of the problems encountered along the way could have been avoided if the officers and men had been better disciplined and trained.

After leaving the capitol on July 7, the convoy ultimately arrived in San Francisco on Sept. 6, five days behind schedule.