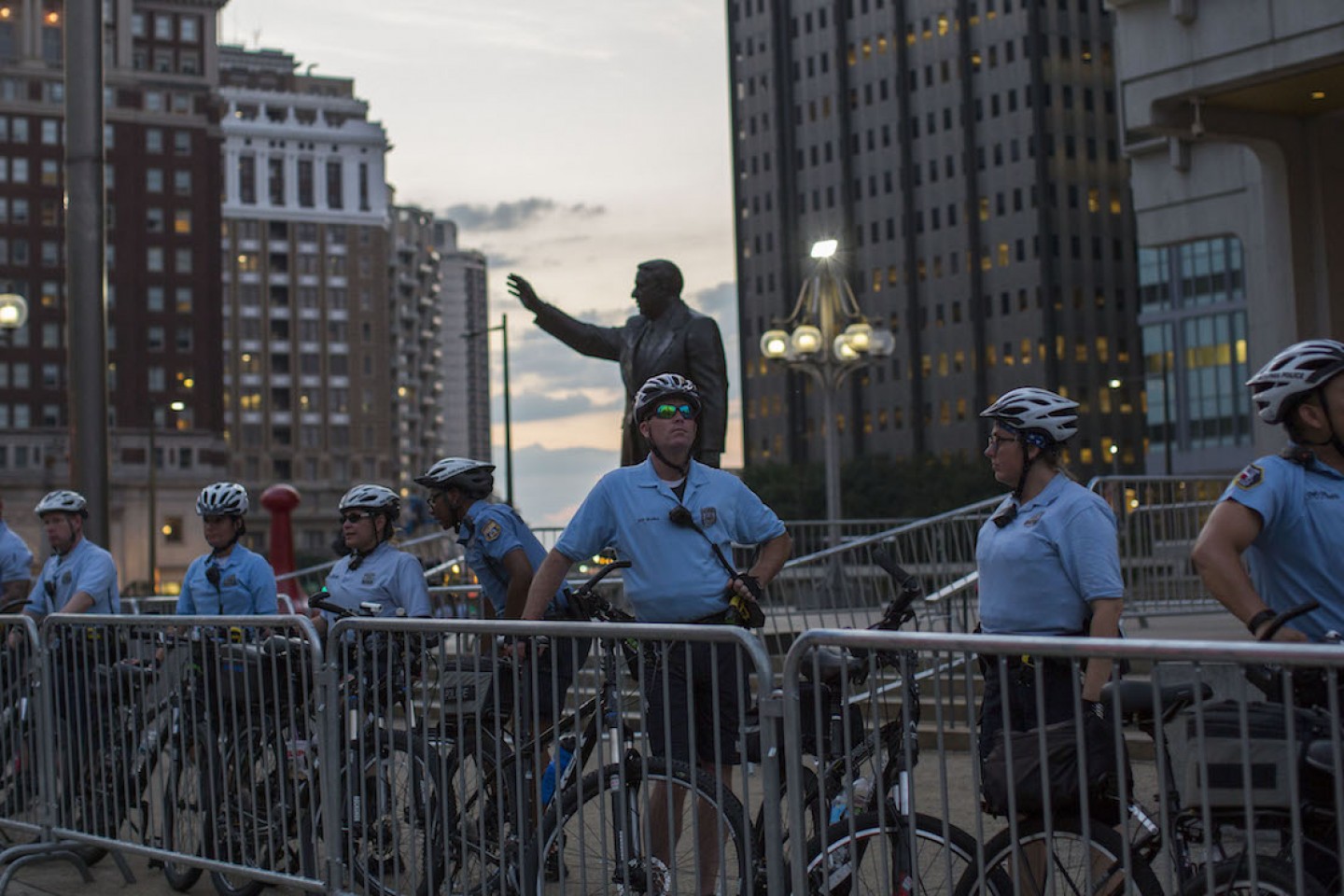 Last week, in a closely watched district attorney’s election, Philadelphia voted overwhelmingly to elect an extremely unlikely prosecutor: Larry Krasner, a veteran civil rights lawyer and vocal critic of the Philadelphia Police Department. Instead of campaigning on “tough-on-crime” credentials—the typical route to urban district attorneys’ offices in recent decades—Krasner did the exact opposite. He touted the 75 lawsuits he’s filed against the police. He knocked on doors alongside former clients turned campaign supporters—activists from groups like Occupy Philly and Black Lives Matter. In his platform, Krasner advocated not merely tinkering with priorities, but thoroughly rethinking the purposes of criminal law, promising to “stop prosecuting insignificant cases,” “treat addiction as a medical problem, not as a crime,” and “stand up to police misconduct.”

It will be fascinating to watch whether and how Krasner succeeds. Can he shift the culture in the DA’s office, which is, among other things, a large bureaucracy? How will he forge a working relationship with the police, his once (and perhaps future) courtroom adversaries? With rising public concern about mass incarceration, a number of cities have elected self-proclaimed “progressive” or “reform” DA’s in recent years—but they still tend to be career prosecutors. Krasner’s career and politics represent a much sharper break from the typical DA mold. Already, according to the Philadelphia Inquirer, some police officers have disavowed Krasner on social media using the hashtag #notmyDA. One officer described Krasner as a “scumbag.” Another wrote, “He doesn’t give me my arrest powers.”

From a historical perspective, Krasner’s election raises equally fascinating questions about urban history, local government, and the changing politics of crime and punishment. In the 1970s, Philadelphia was known for the aggressive law enforcement approach—and flamboyant commentary—of its legendary “Mayor Cop,” Frank Rizzo. During his tenure as police commissioner in the late 1960s, Rizzo gained enormous popularity among blue-collar white voters for his aggressive policing tactics, violent crackdowns on African-American protestors, and “law and order” rhetoric. Rizzo was elected mayor in 1971, making him the nation’s first police chief to ascend to mayoral office, where he remained until 1980.

Ultimately, it will fall to future historians to fully explain how the Philadelphia that elected Frank Rizzo became the Philadelphia of today. But we thought that revisiting the Rizzo years now could provide some helpful context for understanding the challenges and opportunities in store for Krasner and, more generally, for the growing grassroots movement against mass incarceration. I emailed with University of South Alabama history professor Tim Lombardo, author of the forthcoming book Blue-Collar Conservatism: Frank Rizzo's Philadelphia and Populist Politics. The following is a condensed version of our conversation.

SM: In forty years, Philadelphia has gone from electing Frank Rizzo to electing perhaps the nation’s most radical district attorney. What has changed?

TL: A lot has changed since Rizzo was mayor. With relatively recent history I think it’s sometimes easy to forget just how much time has passed. Rizzo left office in 1980. As a historian, I’m always a little leery of drawing too straight a line through over thirty years of history. That said, I think there are two major and interrelated changes that took place in Philadelphia that can at least help provide some context for Larry Krasner’s DA win. One was political and the other demographic. Both, I’d argue, grew out of the divisive politics that marked Frank Rizzo’s Philadelphia.

Krasner’s victory came about partly because of support from Philadelphia’s Black Lives Matter movement, which itself builds upon a long history of black political empowerment in Philadelphia. That history began long before Rizzo, of course, but Rizzo’s well-deserved unpopularity with African-American voters provided a renewed impetus for organizing.

In 1971, State Representative Hardy Williams challenged Rizzo for the Democratic mayoral nomination. Williams was part of a West Philadelphia organization called the Black Political Forum. The BPF drew inspiration from the Black Power Movement and sought to gain local power in the Democratic Party by electing black candidates to positions that oversaw city services to black communities. Williams lost handily in 1971, but symbolically, his run represented another step in the long battle towards meaningful black representation in local government.

African-American candidates continued to challenge Rizzo in the 1970s. Finally, in 1983, Philadelphia elected its first African-American mayor: W. Wilson Goode, a longtime member of the Black Political Forum. The BPF had put years of work into building an infrastructure that could challenge the Democratic Party’s historically white base in Philadelphia. This work paid off not only with Goode, but also with subsequent mayors such as John Street and Michael Nutter.

SM: What about the demographic changes you mentioned?

TL: Compared to other major cities, Philadelphia’s white flight took place later in the twentieth century. The mass exodus of white residents that affected cities like Detroit at midcentury didn’t fully hit Philadelphia until the 1980s and ’90s. In fact, until the 2010 census, Philadelphia remained a majority-white city. That was partly because white Philadelphians had a non-suburban relocation option in Northeast Philadelphia—some of which was still farmland as late as the 1950s. Between the 1950s and 1970s, this area became the prime landing spot for working- and middle-class whites seeking to escape the inner city, as private developers raced to build new suburban-style and, in most cases, explicitly “whites-only” housing.

Among those attracted to Northeast Philadelphia were police officers, who (until 2010) were required to live within the city limits. So the area quickly became a hotbed of grassroots law-and-order politics—and not coincidentally, a Frank Rizzo stronghold throughout his career. Even as the city’s black population gained political power, Northeast Philadelphia remained a conservative counterweight and the only section of the city that reliably voted Republican.

Yet in the end, Northeast Philadelphia was not immune to the overall pattern of white flight. No area in the city lost more population in the 1980s and ’90s. The exodus of conservative white voters to the suburbs sapped the strength of Rizzo-style law-and-order politics. In fact, somewhat ironically, I argue that the first political casualty of Philadelphia’s belated white flight was Frank Rizzo. After he left office, a lot of white Philadelphians claimed that they no longer felt safe in the city and pointed to the end of Rizzo’s mayoralty as the reason they left the city. When Rizzo tried to make a political comeback and ran for mayor as a Republican in 1987, he lost to Wilson Goode, in part because his former base of support had already begun moving away.

SM: What do you make of the police officers’ hostile responses to Krasner? Are these attitudes a legacy of the Rizzo era?

TL: Although a lot has changed since Rizzo’s tenure, I think something that has remained relatively constant is the culture of the Philadelphia Police Department, especially among white officers. The police department has remained an insular and conservative counterforce in city politics.

Some of that is a legacy of Rizzo. He had a reputation for being a “cop’s cop.” Because he had worked his way up through the department—rather than earning a college degree, as most big city police chiefs did by the 1960s—he was incredibly popular among rank-and-file police officers. He was also defensive of their actions. Even as Rizzo’s police department earned a national reputation for brutality, he always refused to admit there was a systemic problem. At best, Rizzo would say that police had a difficult job and should not be punished for occasional mistakes. This attitude filtered down through the rank-and-file. The department under Rizzo acted with near impunity and that became a lasting part of its institutional identity.

But I’d actually give more of the credit (or responsibility) to the Fraternal Order of Police. Even before Rizzo became police commissioner in 1967, the FOP had already begun to assert itself more forcefully in city politics. For years, the FOP had been a labor union not too different from other public sector unions. But in the 1960s, amid the protests and urban uprisings taking place throughout the country, Philadelphia’s FOP transformed into a far more politicized organization. The FOP rallied support, primarily among white voters, for statewide ballot measures to protect police officers in the line of duty and advocate for stricter law enforcement policies. I argue in my book that Rizzo was as much a product of the FOP’s political ascendancy as he was the cause of the city’s law enforcement culture.

I should also point out that the FOP has long been the representative for white police officers. In contrast, Krasner has the support of the Guardian Civic League—an organization for African-American police officers, founded in the mid-1950s by police officer and local civil rights leader Alphonso Deal. The GCL often found itself at odds with the FOP, especially after Deal began campaigning against police brutality. In the long run, though, the GCL helped, little by little, to challenge the culture created by Rizzo and the FOP.

SM: As both police commissioner and mayor, Rizzo worked with two district attorneys who would proceed to have prominent political careers of their own: Arlen Specter and Ed Rendell. Specter served as U.S. senator from Pennsylvania from 1981 to 2011. Rendell served as mayor of Philadelphia from 1992 to 2000, and then as governor of Pennsylvania from 2003 to 2011. How did Rizzo get along with the district attorney’s office?

TL: Rizzo and Specter had fairly similar approaches to law enforcement. In 1967, then-DA Specter ran for mayor on the Republican ticket against the incumbent mayor James Tate. Specter already had a reputation as a law-and-order district attorney. In order to counter Specter’s law enforcement credentials, Tate promised to retain Rizzo as police commissioner and made this promise a centerpiece of his re-election campaign. By almost all accounts that promise was the deciding factor in Tate’s ability to win a very close election. Famously, the Republican Party approached Specter to run for mayor again in 1971, but he refused to run against Frank Rizzo.

Rendell also had a law-and-order bent, though perhaps not so much as Rizzo and Specter. He was among the new breed of centrist Democrats that started transforming the party in the 1970s and 1980s. He and Mayor Rizzo cooperated on some of the major law enforcement issues of the 1970s, including the city’s notorious series of confrontations with the black nationalist, back-to-nature collective known as MOVE.

It remains to be seen what Krasner’s relationship will be with the police department. I don’t know that Philadelphia has had a DA that so many white rank-and-file police officers view as an overt threat, the way many of them seem to view Krasner. Because of that, I’m not sure there is much parallel between the Rizzo years and today. I don’t know that there is any clear precedent for this kind of hostility from the police toward the district attorney.