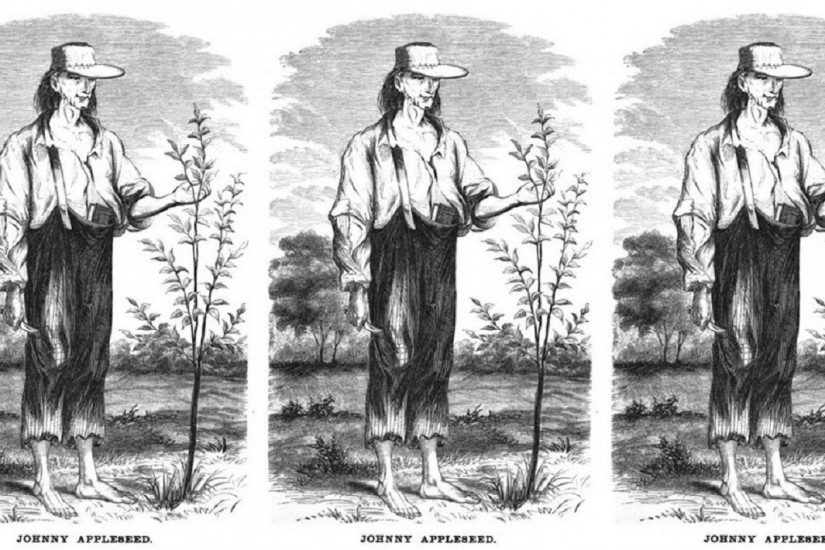 We learn as children that Johnny Appleseed spread the gospel of the apple throughout the Midwest. But how did John Chapman, the actual (strange, possibly insane) person behind the legend, become this virtuous frontier character?

It took a good century after Chapman’s death to fully root out his true biography, William Kerrigan explains in “The Invention of Johnny Appleseed.” Born in Massachusetts in 1774, Chapman planted his first orchard on the Pennsylvania frontier in 1790s. For most of the first half of the 19th century, he tramped around Ohio and Indiana, where his unconventional ways gave birth to plenty of tall tales.

And those tall tales grew like apple orchards. “Johnny Appleseed” made his first major appearance in 1871, decades after Chapman’s death in 1845, in Harper’s Monthly via W.D. Haley, an abolitionist-turned-family farm crusader for the Patrons of Husbandry, also known as the Grange movement. Haley celebrated the “faith, hope, charity, and fidelity” of economically-battered post Civil War Midwestern farms and thought Chapman embodied the “values of piety, frugality, and charity championed by the Grange.” Haley’s Johnny Appleseed was such a good guy he wouldn’t hurt a snake or an Indian.

Rosella Rice, who had met Chapman when she was a girl, added to the growing myth. Kerrigan notes how Rice and Haley freely copied each other in painting “a kind of magical Santa Claus responsible for almost all the apples trees planted across Ohio.” The myth was further solidified by a Lydia Marie Child poem in 1881. Johnny Appleseed had become the gentler avatar of the American origin myth, an anti-Daniel Boone. People who remembered the actual Chapman complained about this sentimental hogwash, but to no avail. This was an “American creation story” as Kerrigan says, with Appleseed as a sort of frontier St. Francis of the Apples, a “benign symbol to use to celebrate the process of American empire-building.”

According to Kerrigan, however, Chapman’s Fort Wayne Sentinel obituary paints a different story.