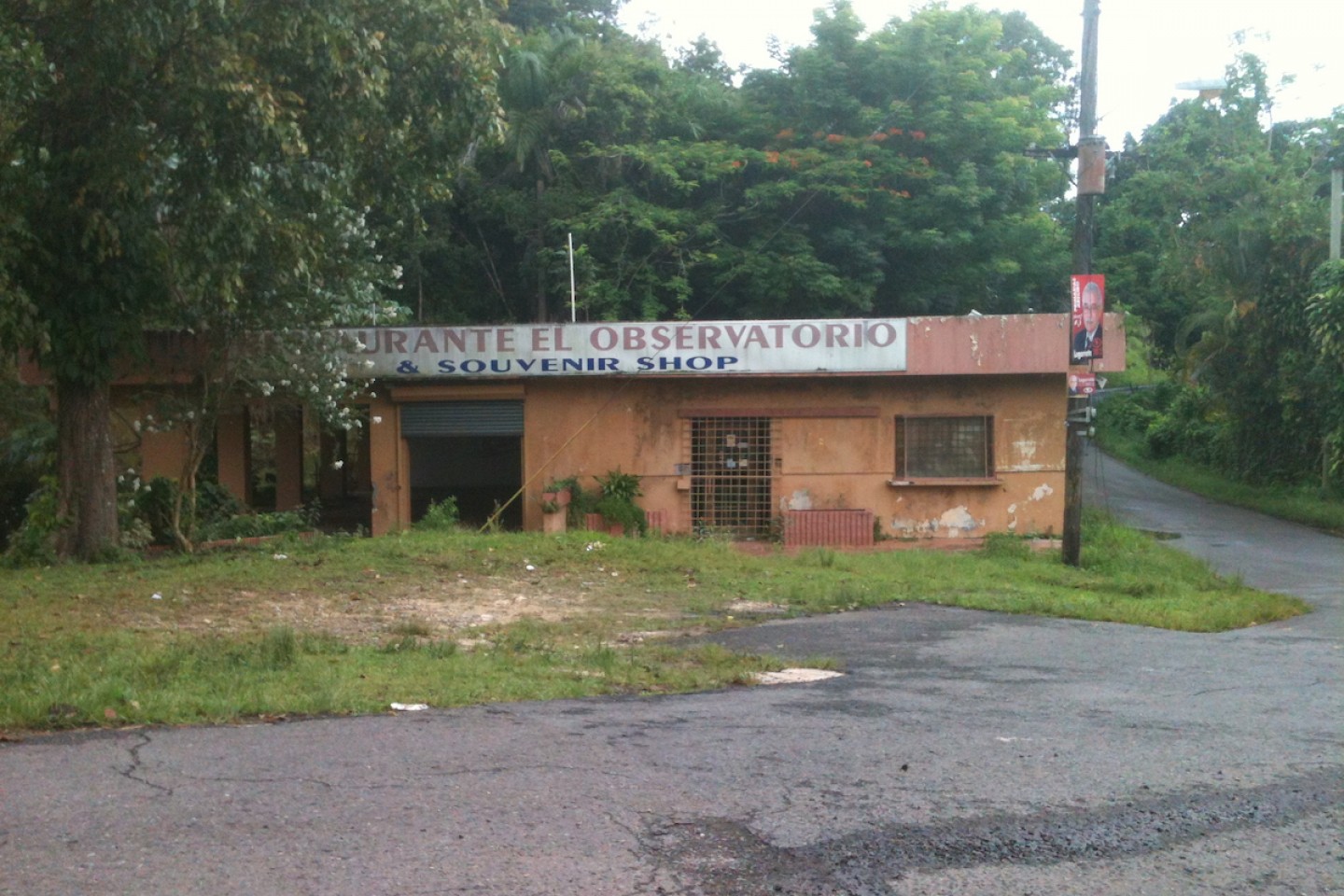 Restaurante El Observatorio, on the main road up to the radio telescope in Arecibo, Puerto Rico.
David Singerman

On September 30th, a team of New York Times reporters in Puerto Rico published a chronicle of a single day across the maimed island. Under a freeway overpass near the town of Arecibo, they spoke to a puertorriqueño named Luis Rodríguez Perez, who had driven 40 minutes from his rural home to that spot. Only here could Rodríguez Perez get enough signal to dial his brother in Buffalo and ask him to find a ticket off the island.

If the name Arecibo rings familiar, that’s because the municipality is home to a giant radio telescope, until recently the largest in the world. Arecibo’s iconic 1000-foot-wide dish starred in the James Bond movie GoldenEye and helped Jodie Foster encounter aliens in Contact. In real life it has aided more prosaic searches for extraterrestrial life, including the first findings of exoplanets around other stars, and discovered new kinds of strange objects across the universe.

We should be appalled but not surprised by the drastic economic inequality in the shadow of this magnificent scientific achievement. For more than four centuries, Western science has depended on work done across the global south, in places colonized and subjugated by European and North American powers. That scientific work, in turn, has depended on the same forces that have created contemporary global inequalities—forces like military power, political oppression, and unfree labor. And despite its celestial subject, astronomy is more implicated in the dirty business of empire than almost any other science.

Sometimes imperialism has paved the way for astronomy. In the seventeenth century, Isaac Newton described himself (apocryphally) as “like a boy playing on the sea-shore...whilst the great ocean of truth lay all undiscovered before me.” In fact, Newton barely strayed from his home in Cambridge. Yet to theorize the movements of planets, moons, and tides he needed observational data from across the globe. So Newton drew on the information networks of the early modern world—those established by European missionary groups like the Jesuits and, just as importantly, by paramilitary trading organizations like the Royal Africa Company, the Dutch East India Company, and the French Compagnie du Sénégal. The data on which Newton built his theories came from soldiers, spice merchants, cotton traders, and slave captains.

Sometimes, on the other hand, astronomy paved the way for empire. Captain James Cook, famous for his Pacific explorations, was implicated in such an exchange. The public rationale for his 1768 journey to Tahiti was that he and his shipboard astronomer would be able to observe the transit of Venus, an incredibly rare astronomical phenomenon that can be used to measure the Sun’s distance from Earth. But the true purpose of his trip—contained in sealed orders from the British Admiralty that were only to be opened at sea—was to investigate and map the rumored continent of Australia. Astronomy provided a useful cover for an English ship snooping around the South Pacific.

The nineteenth century’s most elaborate astronomical ventures were expeditions to observe solar eclipses. Naval vessels were employed to transport imperial astronomers around the globe with their telescopes, cameras, and other heavy equipment. When inland travel was necessary to reach the path of the eclipses, these astronomers depended on army-run networks of railroads, forced labor, and military guards.

And consider the biggest sensation in nineteenth-century astronomy. In 1892, practitioners of the new field of astrophysics announced that Mars experienced seasonal changes, that its surface contained water, and that the lines crisscrossing the planet appeared to be artificial canals. All of this seemed to point to the existence of life on the Red Planet, setting off what came to be known as the “great Mars boom.” The mania was fueled by observations from giant telescopes in the newly conquered American West and the high deserts of Peru and Chile, where the elevation of observatories minimized atmospheric distortions. The New York Herald and other papers struck deals with astronomers across the globe to break “exclusive” news of observations as it came in—news that flowed along the telegraph wires built to connect U.S. commercial interests and military posts.

In the mid-twentieth century, another new field—radio astronomy—peered into the center of our galaxy and helped to confirm Einstein’s theory of general relativity. But as Benjamin Wilson and David Kaiser have pointed out, many of radio astronomy’s newfangled techniques and instruments were first developed by the U.S. government for tracking incoming Soviet ballistic missiles. The telescope at Arecibo, designed primarily to help understand the ionosphere into which those missiles would reenter, was no different. Only secondarily was Arecibo intended to study distant astronomical objects.

Today, to get to the Arecibo telescope from the coastal town that shares its name, you have to drive thirty minutes up steep mountain roads, past businesses and restaurants shuttered long before Hurricane Maria, into a rugged karst landscape riddled with huge sinkholes. In the 1960s, this undulating terrain caught the eye of Cornell scientists trying to find a site suitable for a dish the size of the Eiffel Tower.

It is important not to forget why that land was available in the first place for Cold War-era research by U.S. scientists: in the nineteenth century, a more explicitly imperial America had coveted it. Since Puerto Rico was annexed in 1898, its citizens have lingered at the political and economic margins of the U.S., condemned to a legal limbo the Supreme Court defined as “foreign in a domestic sense.”

Nearly a century of exploitative economic policies—culminating in the ruinous austerity imposed by Congress in 2016—left Puerto Rico deeply weakened long before Hurricane Maria ever hit, and the resulting fragility of the island’s infrastructure is only now apparent to Puerto Ricans’ fellow citizens on the mainland. The well-maintained Arecibo telescope, by contrast, was designed to withstand gale-force winds. As a result, Maria only damaged a few dozen of the dish’s 38,000 aluminum panels. The telescope can bounce radar off Saturn, but Luis Rodríguez Perez cannot call his brother.